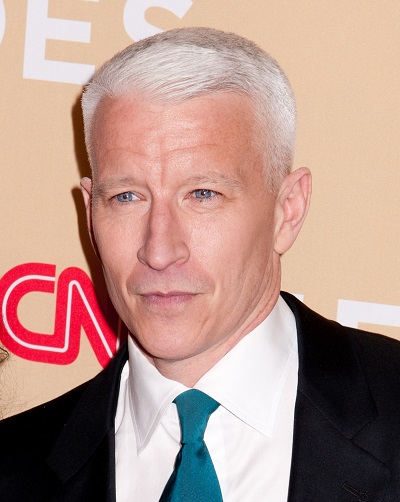 Cooper in 2013, photo by Prphotos.com

Anderson is the son of Gloria Laura (Vanderbilt), an artist, designer, writer, and heiress, and Waytt Emory Cooper, a writer and screenwriter. His half-aunt was socialite Cathleen Vanderbilt. He is a great-nephew of diplomat, society figure, and actor Harry Hays Morgan, Jr.; socialite Thelma Furness, Viscountess Furness; and Gertrude Vanderbilt Whitney, who was a prominent sculptor, art patron, and collector, and who founded the Whitney Museum of American Art.

Anderson has a son.

A DNA test taken by the show Finding Your Roots with Henry Louis Gates, Jr. (2014) stated that Anderson’s genetic ancestry is:

Anderson’s paternal great-great-great-great-grandfather, Solomon Cooper, was said to be of Native American [Choctaw and possibly other] ancestry. However, Anderson’s Native/Indigenous DNA result came from his mother. Anderson’s African DNA was southeastern Bantu in origin.

Anderson’s paternal grandfather was Emmett/Emmet/Emmitt Debro Cooper (the son of William Preston Cooper and Roxieann/Roxanna/Roxana/Roxsine Safronia Flowers). Emmett was born in Alabama. William was the son of Burrell/Burwell C. Cooper and Laura Sophronia/Safronia Bull. Roxieann was the daughter of Willis Flowers and Anna R. Berry.