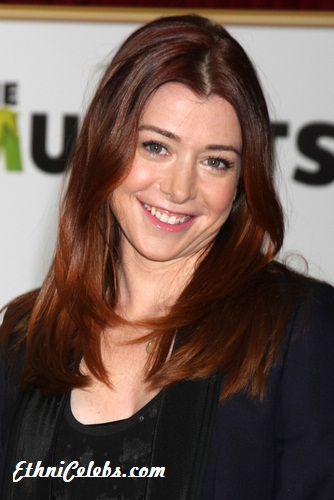 Alyson Hannigan is an American actress and television presenter. She is known for starring in the American Pie films and Date Movie, and for her leading roles on the shows Buffy the Vampire Slayer and How I Met Your Mother.

She has Irish ancestry on her father’s side. Her mother is Jewish (her family was from Poland and Russia). Alyson is married to actor Alexis Denisof, with whom she has two children.

Alyson’s maternal grandfather was Jacob R. “Jack” Posner (the son of Samuel Posner and Goldie Grossfeld). Jacob was born in Maryland, to Jewish emigrants from Eastern Europe, either Russia or Poland, depending on the census.

Alyson’s maternal grandmother is Dorothy Mendel (the daughter of Hyman Noah “Herman” Mendel and Esther Pessie Freedman). Dorothy was born in Atlanta, to Jewish parents from the Russian Empire, with roots in Latvia and Lithuania. Hyman was the son of Abraham Mendel and Sara.

Sources: Genealogy of Alyson Hannigan (focusing on her mother’s side) – https://www.geni.com