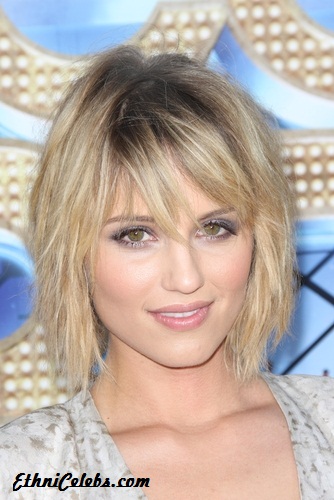 Dianna Agron is an American actress, singer, dancer, and director. She is known for starring in the television series Glee.

Dianna’s father is from an Ashkenazi Jewish family, who moved to the U.S. from Ukraine, Russia, Poland, Latvia, Switzerland, and Estonia. Dianna’s mother has Irish, German, Norwegian, English, and distant Welsh, ancestry; she converted to Judaism when marrying Dianna’s father. Dianna was raised Jewish and was Bat Mitzvah.

Dianna’s paternal grandmother was Frieda Joy “Joyce” Wasserman (the daughter of Leopold Aman Wasserman and Ethel Arona Friedman). Frieda was born in California. Leopold was a Latvian Jewish immigrant. Ethel was born in Texas, to Jewish parents, Bernhard Zadoc Friedman and Chane Rosalie Blackman; they are listed as having been born in Estonia on one census, and Russia on another census.

Dianna’s maternal grandfather was George Leo Barnes (the son of Everett George Barnes and Pauline Josephine Pyle). Dianna’s grandfather George was born in California. Everett was the son of Everett George Barnes, from Connecticut, and of Uba Botella/Botilla Pedersen/Pederson, whose parents were Norwegian. Pauline was the daughter of Grant Simon Pyle and Susan/Susie Jane Roche, whose parents were Irish, her father from Cork and her mother from Clare.

Sources: Genealogy of Dianna Agron (focusing on her father’s side) – http://worldconnect.rootsweb.ancestry.com