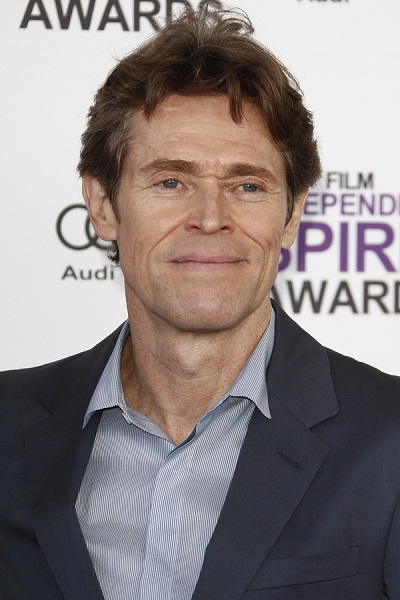 Dafoe in 2012, image via Joe Seer/Bigstock.com

Willem Dafoe is an American actor and model.

He is the son of Muriel Isabel (Sprissler), a nurse, and William Alfred Dafoe, a surgeon, who worked together. His ancestry includes German (where two of his great-grandparents were born, as were some of Willem’s other, much more distant, ancestors), English, Irish, Northern Irish, Scottish, Swiss-French, and French. His brother, Donald Dafoe, is a notable surgeon and research scientist.

His name Willem is a nickname he took on in high school, the Dutch version of the name William.

Willem is married to Italian actress, director, and screenwriter Giada Colagrande. He has a son with his former wife, director Elizabeth LeCompte.

Willem’s patrilineal line can be traced back to Daniel Thevou/Devoe/Dafoe, who was born, c. 1665, in Missy, Vail, Switzerland, and to his wife, Marianne Delcour. The surname was also spelled Defoe. The family moved to New York, U.S., establishing a branch there before moving to Ontario, Canada.

Willem’s paternal grandfather was George Eber Dafoe (the son of William James Dafoe and Fannie/Fanny Ann White). George was born in Belleville, Hastings, Ontario, Canada. Willem’s great-grandfather William was the son of George Dafoe and Elizabeth Sills, whose father was German, from Sassenberg, Hochstift Münster. Fannie was the daughter of Reuben or Stephen White and Elizabeth/Betsy Keeler.

Willem’s paternal grandmother was Gertrude Smith Collins (the daughter of Alfred H. Collins and Phoebe Ann Weed). Gertrude was born in Oasis, Waushara County, Wisconsin, to a father from Canada and a mother from New York. Alfred was the son of Jessie Collins and Johanna Burns. Phoebe was the daughter of Henry/Harry C. Weed and Asenath Dake.

Willem’s maternal grandfather was Henry Sprissler (the son of Karl/Charles Sprissler and Helena/Lena May). Henry was born in Boston, Massachusetts, to German parents. Charles was the son of Joseph Sprissler and Catharine. Helena was the daughter of Valentine May and Helena.

Willem’s maternal grandmother was Caroline Isabella Dunn (the daughter of William Frank/Franklin/Francis Dunn and Mary Elizabeth Cameron). Caroline was born in Massachusetts, to an Irish-born father and a Scottish-born mother.