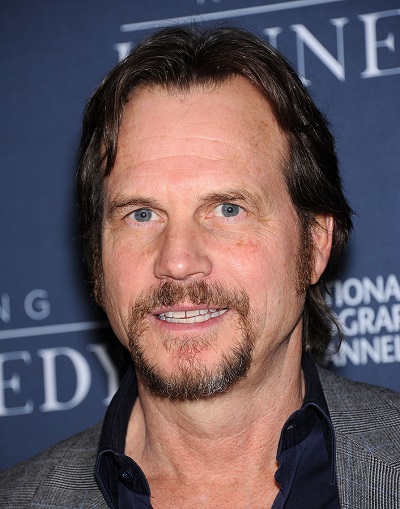 Bill Paxton was an American actor and director. His roles included Twister, Aliens, and Near Dark, among many other films. He was the son of Mary Lou (Gray) and John Paxton (John Lane Paxton), who was a museum executive, businessperson, and actor. He was married to Louise Newbury, until his death. The couple had two children, including actor James Paxton.

Bill’s paternal grandfather was Frank Paxton (the son of John Gallatin Paxton and Mary Neill/Neil Gentry). Frank was born in Missouri. John was the son of Elisha Franklin Paxton and Elizabeth Hannah White; Elisha was a lawyer and soldier, who served as a brigadier general in the Confederate States Army at the American Civil War, and died in combat while leading the Stonewall Brigade during the Battle of Chancellorsville. Bill’s great-grandmother Mary was the daughter of Richard Harrison Gentry and Mary Neil Wyatt.

Bill’s maternal grandfather was Wayne Charter Gray (the son of Levi S. Gray and Olive M. Charter). Wayne was born in Illinois. Levi was the son of Samuel Douglas Gray and Ann Elizabeth Wood. Olive was the daughter of Robert Howard Charter and Mary Annette Brown.