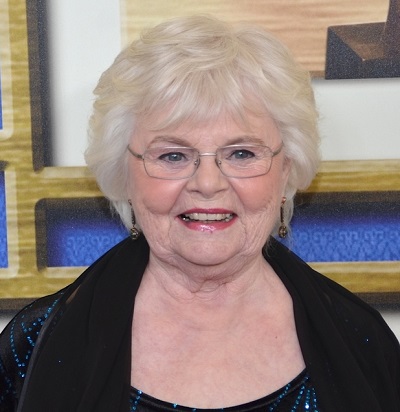 June Squibb is an American actress. She is the daughter of Joybelle W. (Force) and Lewis C. Squibb. Her mother was a well-known piano player, who played for silent movies in the 1920s, and won the World Championship Old Time Piano Playing Contest in 1975 and 1976.

June has German, English, some Swiss-German, Scottish, and Welsh, and distant Dutch, ancestry. She is a convert to Judaism.

June’s paternal grandmother was Harriet “Hattie” Catherine Burrus (the daughter of Casper/Cass Burrus and Chloe Henderson). Casper was the son of Dickerson B. Burrus and Mary Sarver. Chloe was the daughter of Mayberry/Mabry Henderson and Neoma/Naomi Beck.

June’s maternal grandfather was Abraham Edward Force (the son of Thomas Doty Force and Elizabeth Jane Hotz). Thomas was the son of Abraham Force and Sarah “Sally” Doty/Doughty. Elizabeth was the daughter of Johannes/John B. Hotz, who was from Hesse-Darmstadt, Germany, and of Lucinda Craven.