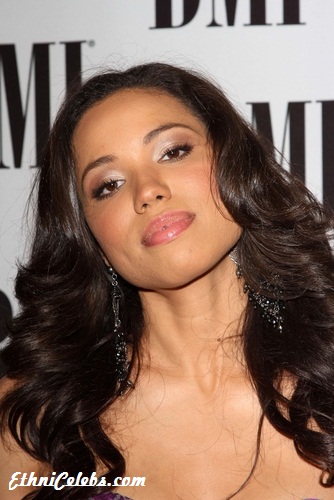 Smollett-Bell in 2011, photo by s_bukley / Shutterstock.com

Jurnee Smollett-Bell, also credited as Jurnee Smollett, is an American actress. She is known for starring as Samantha Booke in the film The Great Debaters, among other roles. She is the daughter of Janet (Harris) and Joel Smollett. Her siblings include Jojo Smollett, Jazz Smollett, Jussie Smollett, Jake Smollett, and Jocqui Smollett, all of whom have been involved in the entertainment business.

Jurnee’s father, who was white, was Ashkenazi Jewish (from a family from Romania, Russia, and Poland). The family surname was Smolovitz several generations back.

Jurnee stated in an interview that, aside from African-American, their mother has Native American, Louisiana Creole, and Irish ancestry. It is not clear if this is accurate.

Jurnee is married to musician Josiah Bell, with whom she has a son.