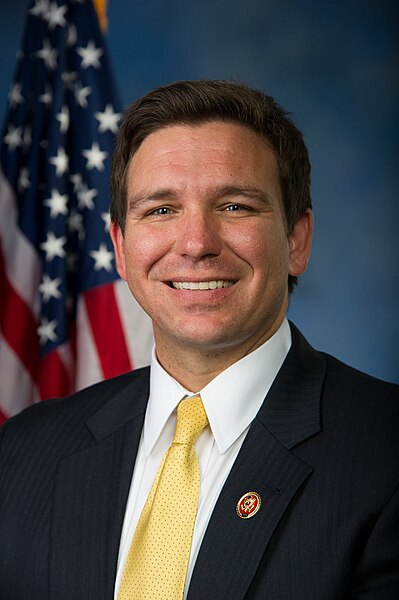 Ron DeSantis is an American attorney, naval officer, and politician. A Republican, he has been Governor of Florida, since January 8, 2019. He was previously a Member of the U.S. House of Representatives from Florida, from January 3, 2013 to September 10, 2018.

Ron is the son of Karen (Rogers) and Ronald DeSantis. His parents are both Italian-Americans, with roots in the Midwest. He was raised partly in Orlando, then Dunedin, Florida. He is married to news and conversation television show host Casey DeSantis, with whom he has two children.

Ron is a Roman Catholic.

Ron’s paternal grandfather was Daniel DeSantis (the son of Nicola Eugenio Desantis and Maria Nolfi). Daniel was born in Pennsylvania, to Italian parents, who were born in Cansano, L’Aquila, Abruzzo. Nicola was the son of Eugenio DeSantis and Filomena Pellegrina. Maria’s parents, Antonio/Tony Nolfe and Angeline Marchionni, were from Bugnara, Abruzzo.

Sources: Information about some of Ron’s family history – https://medium.com