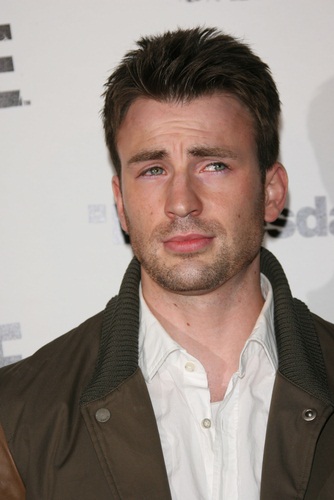 Chris Evans is an American actor and director/filmmaker. Often recognized for appearing in material adapted from comic books, he is known for his roles as the Human Torch in two Fantastic Four films and Steve Rogers/Captain America in the Marvel Cinematic Universe, as well as for starring in Not Another Teen Movie, The Perfect Score, Cellular, Sunshine, The Nanny Diaries, The Loss of a Teardrop Diamond, The Losers, Snowpiercer, Gifted, The Red Sea Diving Resort, Knives Out, and Lightyear, among many other projects.

Chris was selected People Magazine’s “Sexiest Man Alive” in 2022. He is the second man of significant Italian heritage to be given this title by the magazine. Bradley Cooper, in 2011, is the first.

Chris’s paternal grandfather is George Robert Evans, Jr. (the son of George Robert Evans and Maude/Maud Ellen Davis, born Maude/Maud Ellen Cryer). Chris’s grandfather George was born in Fort Sam Houston, Bexar, Texas, and is a prominent graphic arts executive. Chris’s great-grandfather George was the son of Matthew/Mathew James Evans, who was Welsh, and of Mary Anne/Anna/Annie Morlee, who was born in Illinois, to English parents; Matthew’s own father was named John M. Evans. Chris’s great-grandmother Maude was the daughter of Thomas Leo Cryer and Lola Ellen McCollom; she later took on the surname of her stepfather, John Mitchell Davis.

Chris’s paternal grandmother was Alma Emma Behling (the daughter of John Frank Behling and Ruth Annette Marold). Alma was born in Atco, Wayne, Pennsylvania. John was the son of German parents, Johann/John Dietrich/Diederick/Detrich Behling, from Bremen, and Johanna Marchhausen/Marschhausen. Ruth was the daughter of John Charles Marold and Emma Louisa/Louise Schneider, who were both also of German descent, with at least partial roots in Baden-Württemberg.

Chris’s maternal grandfather was Andrew Capuano (the son of Michele “Michael” Capuano and Sabina Solimina/Solimene/Solimele/Solimine). Andrew was born in Somerville, Middlesex, Massachusetts, to parents who were born in Province of Avellino, Campania, Italy. Michele was born in Candita, the son of Ignato Capuano. Sabina was the daughter of Sabbato/Sabato/Sabatiello Solimene/Solimele/Solimine and Luigia/Louise Rullo.

Chris’s maternal grandmother was Rita Marie Garvey (the daughter of Everett Earl Garvey and Grace Agnes Shaughnessy). Rita was born in Marlborough, Middlesex, Massachusetts. Everett was the son of Thomas F. Garvey, whose parents were Irish, and of Mary Coggin/Coggins, who was Irish, with family from County Sligo. Grace was born in Hudson, Middlesex, Massachusetts, the daughter of Irish-born parents, Martin Shaughnessy and Margaret “Maggie” Burke.

Chris’s matrilineal line can be traced back to Honora Morgan, who was born in Ireland.

Genealogy of Chris’s mother (through her brother) – http://freepages.genealogy.rootsweb.ancestry.com