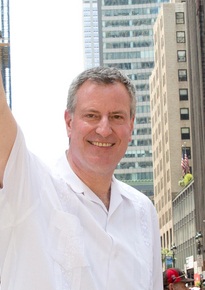 Bill was in Norwalk, Connecticut, and then Cambridge, Massachusetts. Bill’s father, Warren Wilhelm, was a World War II veteran who received a Purple Heart; he was a budget analyst for the U.S. Government and an economist for Texaco. He had German, French-Canadian, French, English, distant Irish, Welsh, Belgian Walloon, Breton, Cornish, Swiss-German, and Dutch, and possibly 1/512 Iroquois Indigenous Canadian, ancestry. Bill’s uncle, Donald George Wilhelm, Jr., was in the CIA.

Bill’s mother, Maria/Mary Angela (de Blasio), was of Italian descent. Bill’s mother wrote the book The Other Italy: The Italian Resistance in World War II (1988), was in the Office of War Information during WWII, and worked in public relations at the Italian consulate. Bill was brought up by his mother’s family. Bill changed his name to Warren de Blasio-Wilhelm in 1983, and became known Bill de Blasio in 2001.

Bill is married to writer, editor, communications professional, and political figure Chirlane McCray. Chirlane is black, of African-American, Barbadian, and Saint Lucian descent. The couple has two children. Bill is fluent in Italian.

He is six foot five.

Bill’s paternal grandfather was Donald/Donaldson George Wilhelm (the son of John Ricart Wilhelm and Agnes May Marantette/Marentette). Donald was born in Defiance, Ohio. John was of German descent, the son of Adam Wilhelm, who had roots in Munich, Upper Bavaria, Bavaria, and of Mary Ann Ricart/Rikart. Agnes was of French-Canadian ancestry, the daughter of Patrick Godet dit Marentette, from Assumption, Essex, Ontario, Canada, with family in Sandwich, Ontario, and of Françoise/Frances Mouton.

Bill’s paternal grandmother was Nina May Warren (the daughter of Solomon Sangston Warren and Emma Jane Prettyman). Nina was born in Iowa. Solomon was the son of WIlliam H. Warren and Helen Lutz. Emma was the daughter of Lewis Wyatt Prettyman and Hannah Rebecca Kintigh.

Bill’s maternal grandmother was Anna Briganti (the daughter of Innocenzo Briganti and Maria Schiavone). Anna was born in Grassano, province of Matera, Italy.

Bill is one of several people of significant Italian heritage to have run a plausible or semi-plausible campaign for a major political party’s nomination for President of the United States. Of these candidates, the ones who have won a major party’s caucus, primary, and/or nominating ballot are:
*Al Smith (who was the Democratic Party’s nominee for President of the United States in 1928, and was also a candidate for the 1920, 1924, and 1932 Democratic nominations for President: in 1928, he won 12 contests; in 1932, he won 4 contests; Smith’s paternal grandfather was Italian)
*Michael DiSalle (1960; Democratic; won 1 state, Ohio)
*Rick Santorum (Republican; ran in 2012 and 2016: in 2012, he won 11 contests; Santorum is of three quarters Italian descent)

Genealogy of Bill’s paternal grandfather, Donald/Donaldson George Wilhelm (focusing on his own mother’s side) – http://www.genealogy.com

Genealogy of Bill’s paternal great-grandfather, John Ricart Wilhelm (focusing on his own father’s side) – https://www.ancestry.com