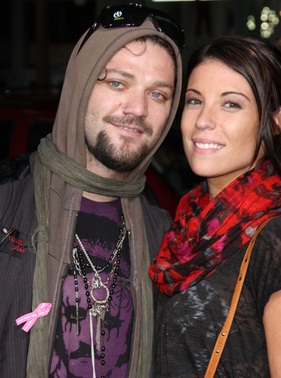 He is the son of April and Phil Margera. His grandfather nicknamed him “Bam Bam” after noticing him purposefully running into walls as a child. Bam is married to Nicole Boyd, with whom he has a son.

Bam’s paternal grandfather was Phillip Margera (the son of Vincent Margera and Mary Iaconna). Phillip’s parents were born in Isca, Catanzaro, Calabria, Italy. Vincent was the son of Salvatore Morgera. Mary was the daughter of Phillip Iaconna and Teressa.

Bam’s paternal grandmother was Darlene Stauffer (the daughter of Roy B. Stauffer and Ruth Shreiner). Darlene was born in Pennsylvania. Roy was the son of Henry Mohn Stauffer and Mary Lida Behmer. Ruth was the daughter of Clayton Redcay Shreiner and Mabel Kopp Rhoads.

Bam’s maternal grandmother is Velma/Wilma Harriet Vogel (the daughter of Lawrence B. Vogel and Harriet F. Gibson). Velma was born in New Jersey. Lawrence was the son of Russell Vogel and Bertha L. Brown. Bam’s great-grandmother Harriet was the daughter of Archibald G. Gibson and Anna Rebecca Fennell.

Genealogy of Bam Margera (focusing on his mother’s side) – http://worldconnect.rootsweb.ancestry.com