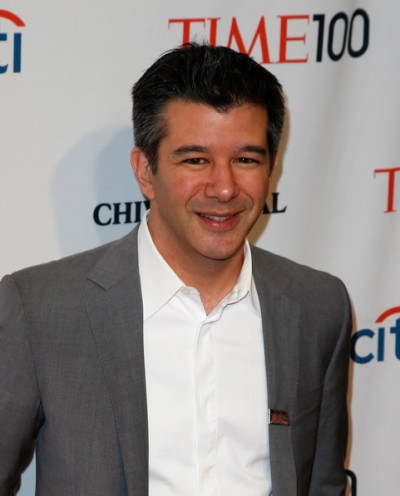 Kalanick in 2014, photo by Prphotos

Travis Kalanick is an American computer programmer and businessperson. He is the co-founder of the peer-to-peer file sharing company Red Swoosh and the transportation network company Uber.

His father, Donald Kalanick, is the grandson of emigrants from the Czech lands, who were likely ethnic Rusyns. His mother, Bonnie, was of three quarters Ashkenazi Jewish background (her own maternal grandfather was of German and Irish descent).

Travis’ paternal grandfather was Michael Andrew “Mike” Kalanick (the son of Johannes/Jan Kulhánek/Kalyanin, later John Kalanick, and of Anna Polanská/Polansky). Michael was born in Montana, to Rusyn parents. John was born in Valaškovce, Slovakia, the son of Paulus Kalyanin and Maria Onufreva/Onufriov-Csornej.

Travis’ maternal grandfather was Morris/Maurice Bloom (also known as Maurice Buddy Bloom, the son of Frank Bloom and Rose Winegart). Morris was born in California. Frank was a Polish Jewish immigrant, and was the son of Morris Bloom. Rose was a Russian Jewish immigrant.

Travis’ maternal grandmother was Shirley Anita Ehni (the daughter of Charles Joseph Ehni and Tillie Kohn). Shirley was born in Ohio. Charles was the son of Charles William Ehni, whose parents were of German descent, and of Anna Haver, whose parents were Irish. Travis’ maternal grandmother Tillie was the daughter of Samuel “Sam” Kohn, a German Jewish immigrant, and of Esther Eppstein, a Polish Jewish immigrant.