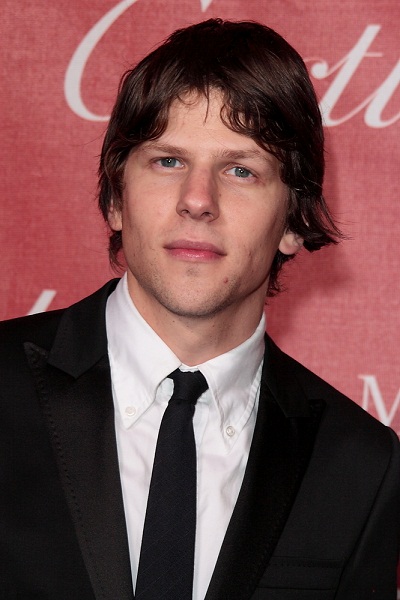 Eisenberg in 2011, photo by PrPhotos.com

Jesse Eisenberg is an American actor, author, playwright, and humourist. He played Facebook founder Mark Zuckerberg in the film The Social Network (2010), and was nominated for a Best Actor Oscar for the performance. His roles also include Zombieland, and its sequel, The Squid and the Whale, Now You See Me, The End of the Tour, Adventureland, and Batman v Superman: Dawn of Justice.

Jesse is the son of Amy, a professional clown, and Barry Eisenberg, a college professor. His parents are both Jewish. His sisters are Kerri and former actress Hallie Eisenberg. Jesse is married to Anna Strout, with whom he has one child. Anna is also Jewish.

[while not raised in a religious home], I found my Judaism through cultural things like comedy, social justice work, stuff that I didn’t associate with the religion but is inherent in it and is practiced by Jewish people in modern life… Like many Jews, I found my own way to being Jewish. It’s a religion of curious, questioning people, and there are as many ways of practicing it as there are Jews.

One of Jesse’s paternal great-grandfathers was named Sam Eisenberg. He was from Poland.

Jesse’s maternal grandfather was Joseph “Joe” Fishman (the son of Isadore/Isador Fishman and Dora/”Nora” Greenblatt/Nesenblatt). Joseph was born in New York, to parents who were Russian Jews.

Sources: Genealogy of Jesse Eisenberg (focusing on his mother’s side) – http://www.geni.com