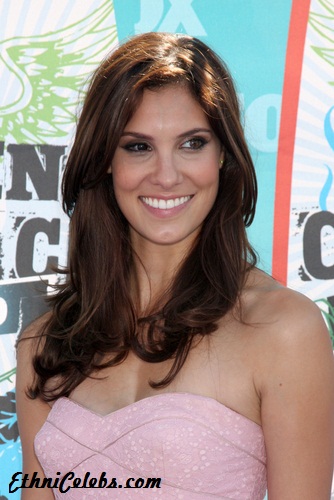 Daniela Ruah is an American and Portuguese actress.

Daniela is the daughter of Dr. Moises Carlos Bentes Ruah and Catarina Lia Azancot Korn. Dr. Ruah was head of the ear, nose, and throat department of Boston University Hospital. She was raised in a Jewish household. Her parents are from Portugal, and her family returned there when Daniela was five. Daniela began acting as a teen in Portuguese soap operas. She has a B.A. in Performing Arts from London Metropolitan University. In 2007, she moved to New York. She has dual citizenship, U.S. and Portuguese.

Daniela is married to stuntperson David Paul Olsen, who is the brother of actor Eric Christian Olsen. Daniela and David have two children.

Daniela’s father is from a Sephardi Jewish family, of Portuguese Jewish and Moroccan Jewish ancestry. The entire Portuguese Jewish community had been expelled in 1498. Dr. Ruah’s family had been one of the first to return in the nineteenth century, also living in Gibraltar.

Daniela’s paternal grandmother was Esther Buzaglo Bensusan (the daughter of Abraham “Abe” Bensusan/Bensussan and Magdalena/Magda Macnin Judith Amzalak/Amzelek Buzaglo). Esther was born in Lisbon, Portugal, and was a Sephardi Jew. Abraham was born in Gibraltar, the son of Mesod Abraham Bensusan and Esther Benoliel. Magdalena was born in Lisbon, the daughter of Meir Isaac Buzaglo and Merita/Mary Ben-Oliel/Benoliel Amzalak/Amzelek.

Daniela’s maternal grandmother was Vera Jacob Muginstein Azancot (the daughter of António Montero Azancot and Simy Sophie Muginstein). Vera was born in Lisbon, Portugal. António was born on São Tomé Island, the son of Jacob Levy Azancot and Prudência Montero; Jacob was a Sephardi Jew, born on São Tomé Island, the son of António Azancot and Meriam Levy Benuyli, and Prudência was Spanish, born in Cádiz, Spain, the daughter of João Montero and Rita Serrano. Daniela’s great-grandmother Simy was born in Odessa, Russia, the daughter of Izak Jankel Mouginchteyn/Muginstein and Paulina/Pesja Slatapolskaja. Simy was an Ashkenazi Jew.