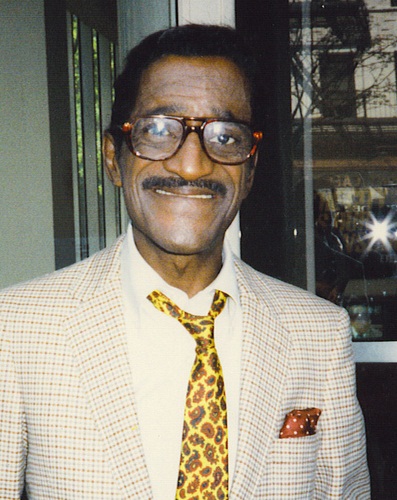 Sammy was the son of dancers Sammy Davis, Sr. and Elvera/Elvira Sanchez. His father was born in Wilmington, North Carolina, to an African-American family. His mother was born in New York, and had Cuban, African-Cuban, and African-American ancestry. During his lifetime, Sammy had stated that his mother was Puerto Rican. He began his career with the Will Mastin Trio, along with his father and Will Mastin.

Sammy was married to entertainer Altovise Davis, until his death. He had a son with Altovise, and three children with his former wife, Swedish-born actress May Britt.

Sammy Davis, Jr. converted to Judaism in 1961. He was a practicing Jew.

Sammy’s maternal grandmother was Luisa Valentina Aguiar (the daughter of Enrique Aguiar and Ida Henderson). Luisa was born in New York. Enrique was a Cuban emigrant, who was born in Havana, the son of Juan De Deis Pastoria and Francisca Aguiar. Ida was born in Connecticut, and was African-American, the daughter of Tanton Henderson and Ellen Allen.

Sammy’s mother is listed as “Mulatto” on U.S. Censuses. She had at least some African ancestry both from her Cuban heritage, and from her African-American maternal grandmother.

Genealogy of Sammy Davis, Jr. (focusing on his mother’s side) – https://www.geni.com