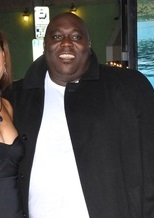 Faizon Love is an American actor and comedian. He is known for his roles in the films Don’t Be a Menace to South Central While Drinking Your Juice in the Hood, Couples Retreat, Elf, The Perfect Holiday, and Friday, among many others.

Faizon is the son of Ernestine and Richard. Faizon was evidently born Langston Faizon Santisima in Santiago de Cuba, Cuba. His mother is African-American. It is not publicly clear if his father is of African-American or African-Cuban background, or a mix of both. Faizon has described himself as “Cuban Black.”

Because of his father’s U.S. Navy career, Faizon was raised a military brat, living in Southeast San Diego, California, and Newark, New Jersey.

Faizon’s maternal grandmother was Lois Lewis (the daughter of Charlie Lewis and Maggie Jones). Lois was born in Greenville, Alabama.