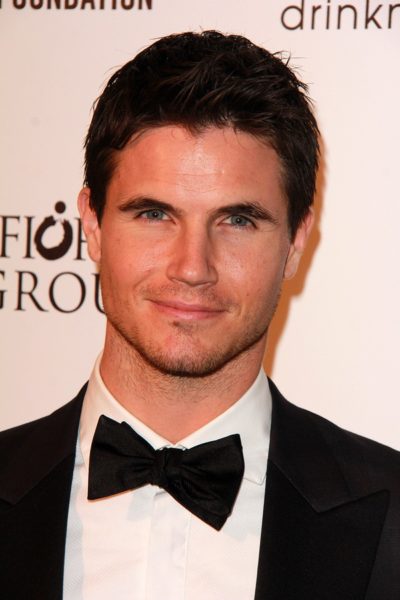 Amell in 2015, photo by kathclick/Bigstock.com

Robbie Amell is a Canadian actor, model, and producer. His roles include The DUFF and Code 8, and The Babysitter films. His first cousin is actor Stephen Amell. Robbie is married to actress Italia Ricci, with whom he has a son.

Robbie’s ancestry is English, Scottish, German, Irish, 1/16th French-Canadian, and more distant Welsh and Dutch. Many of Robbie’s ancestral lines have been in Canada going back many generations, on both sides of his family. He also has American-born ancestors going back to the 1600s.

Robbie’s step-great-grandfather was Henry John Burden, a WWI flying ace officially credited with 16 victories; Henry was a grandson of Timothy Eaton (1834-1907), who founded the famous Canadian store Eaton’s in Toronto in 1869, and who was an emigrant from Ballymena, County Antrim, Northern Ireland.

Robbie and his wife Italia have also become U.S. citizens.

Robbie’s paternal grandmother was Rosemary Hewetson (the daughter of Alfred Russell Hewetson and Rosa Melvina Breithaupt). Rosemary was born in Brampton, Ontario. Alfred was the son of English parents, John William Hewetson and Eliza Jackson. Rosa was the daughter of Louis Jacob Breithaupt, who was of German descent, and of Emma Alvarena/Alvarine Bowman Devitt, who was of entirely or almost entirely German ancestry.

Genealogy of Robbie’s mother (focusing on her mother’s side) – http://freepages.genealogy.rootsweb.ancestry.com