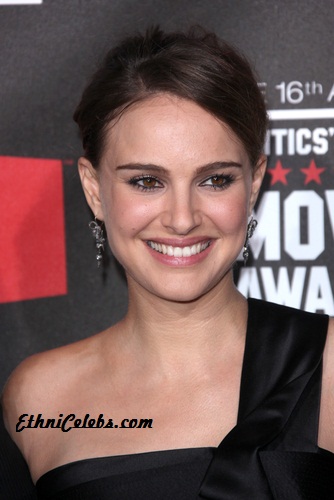 Natalie Portman is an Israeli and American actress, director, and producer. She won the Academy Award for Best Actress for Black Swan (2010). She is the first person born in the 1980s to have won the Best Actress Oscar, and thus could be considered the first millennial to have done so (Eddie Redmayne is the first millennial to have won the Best Actor Academy Award, for The Theory of Everything, 2014).

Natalie was born in Jerusalem, Israel, and moved with her family to the U.S. East Coast during her early childhood. Natalie’s father, Avner Hershlag, is Israeli-born; his family were Jews from Poland and Romania. Two of Natalie’s paternal great-grandparents were killed in the Holocaust. Natalie’s mother, Shelley (Stevens), is American, from Ohio; her family were Jewish emigrants from Austria, Lithuania, Poland, Russia, and Ukraine. Natalie is able to speak Hebrew, and studied French, Japanese, Arabic, and German. She attended Solomon Schechter, a Jewish day school.

Natalie is married to French dancer Benjamin Millepied, with whom she has two children.

Natalie’s paternal grandfather was Zvi Yehuda Hershlag (the son of Eliezer “Leiser” Hershlag and Leah Penzak). Zvi was an economics professor and author. He was a Polish Jew, who was born in Rzeszów, Poland. Eliezer was born, in 1885, in Dembitz, Poland, the son of Israel Hershlag and Miriam. Leah was born in 1888, in Rzeszow, Poland. Natalie’s great-grandparents Eliezer and Leah were both killed in 1942 in the Holocaust, in Belzec, Poland.

Natalie’s paternal grandmother, Mania/Manya Portman, was a Romanian Jew. Natalie has stated that Mania’s mother spied for the British during World War II.

Natalie’s maternal grandfather was Arthur “Art” Stevens (born Arthur Edelstein; the son of Moses Edelstein and Helen Klar). Arthur was born in New York, to Jewish immigrant parents; Arthur’s paternal grandparents were from Austria and Ukraine, and Arthur’s maternal grandparents were from Russia. Moses Edelstein was the son of Avraham Edelstein (who was born in Kawsko, Stryj, Galicia, the son of Baruch Edelstein [the son of Yosef Edelstein and Neche Ettinger/Ettginger] and Henie Scheninger [the daughter of Abraham Seinwel Scheninger and Eidel]) and Bruche Hendel/Handel/Handler (born in Bolekhiv, Ivano-Frankivs’ka oblast, Ukraine, the daughter of Leib Hendel/Handel and Breine/Brenner Kiwak). Natalie’s great-grandmother Helen Klar was the daughter of Hershel Klar and Sarah.

Natalie’s maternal grandmother was Bernice Hurwitz (the daughter of Michael Hurwitz and Esther Schiff). Bernice was born in Maryland, as were her parents. All of Bernice’s grandparents were Jewish immigrants from Eastern Europe; according to one census, all of her grandparents were born in Lithuania; other censuses list all of her grandparents as having been born in Russia. Michael Hurwitz was the son of Israel Hurwitz and Bosie “Bessie.” Esther Schiff was the daughter of Aaron Harry Schiff and Lizzie/Libby. Natalie talks about her background, 2006 – http://www.hillel.org