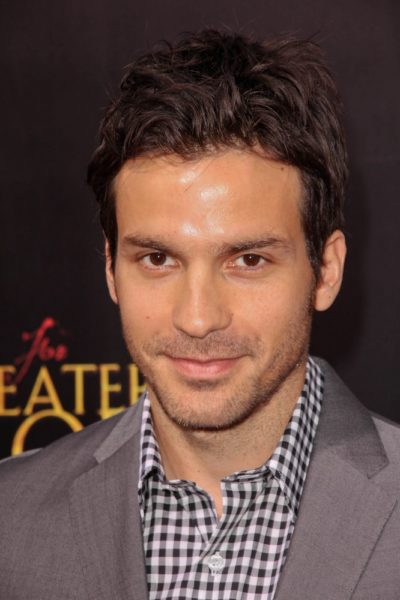 Cabrera in 2012, photo by Prphotos

Santiago Cabrera is a Chilean-born actor. He is known for his role in the films Transformers: The Last Knight and the show Star Trek: Picard, among other productions.

Santiago spent much of his childhood internationally, including England, Romania, Canada, and Spain, later living in Chile. Santiago is also a British citizen. He is married to theatre director Anna Marcea, with whom he has a son.

Santiago’s parents are from upper-class Chilean families. His ancestry includes Spanish, Basque, small amounts of French and Belgian/Flemish, as well as approximately 1/32 English, 1/64th Irish, 1/64th German, and possibly other. He has ancestors who lived in Peru.

Santiago is a fifth cousin, once removed, of football coach Manuel Pellegrini. Santiago’s great-great-great-great-grandmother, María Ignacia Isidora Zegers Montenegro (known as Isidora Zegers), was also the five times great-grandmother of Manuel Pellegrini. Isidora was a prominent artist and composer in Chile; she was born in Madrid, Spain, and was the daughter of Juan Francisco Zegers Durás, who was born, c. 1781, in France, and of Florencia Montenegro Rodríguez de Toledo, who was born, c. 1785, in Madrid. This Zegers family are Flemish Belgians.

Santiago’s maternal grandfather was Clemente Pérez Zañartu (the son of Osvaldo Pérez Valdés and María Luisa Zañartu Íñiguez). Clemente was born in Santiago, Chile, and served as Chilean ambassador to Vatican City in the 1960s. Osvaldo was the son of Osvaldo Pérez Sánchez and Cristina Valdés O’Brien. Santiago’s great-grandmother María Luisa’s father was Aníbal Zañartu Zañartu, who was Vice President of Chile, from 12 July, 1901 to 18 September, 1901, as well as Minister of Foreign Affairs and Colonization, from 1885 to 1886, and a three time Minister of the Interior, from 1885 to 1886, 1887 to 1888, and in 1896. He was a relative, to some degree, of two Presidents of Chile, Federico Errázuriz Zañartu (1871-1876) and Federico Errázuriz Echaurren (1896-1901). María Luisa’s mother, Santiago’s great-great-grandmother, was Amelia Íñiguez Vicuña.

Santiago’s maternal grandmother was Teresa Walker Concha (the daughter of Horacio Walker Larraín and Teresa Concha Cazotte). Teresa was born in Santiago, Chile. Horacio served as Minister of Justice, in 1931, and Minister of Foreign Affairs, from 1950 to 1951. He was the son of Joaquín Eduardo Walker Martinez, who served as President of the Chamber of Deputies of Chile, from 1896 to 1897, and of Elisa Larraín Alcalde. Santiago’s great-grandmother Teresa was the daughter of Enrique Santiago Concha Jiménez Lobatón Subercaseaux and María Teresa Cazotte Alcalde.

Santiago’s great-grandfather Horacio Walker Larraín was also the paternal grandfather of politicians Ignacio Walker, who served as Minister of Foreign Affairs of Chile, from 29 September, 2004 to 11 March, 2006; Patricio Walker, who served as President of the Chamber of Deputies, from March 2007 to March 2008, and President of the Senate, from 11 March, 2015 to 15 March, 2016; and Matías Walker, a Deputy. This makes Santiago a first cousin, once removed, of Ignacio, Patricio, and Matías.

Sources: Genealogy of Santiago Cabrera (through his brother, Pedro) – https://www.geni.com