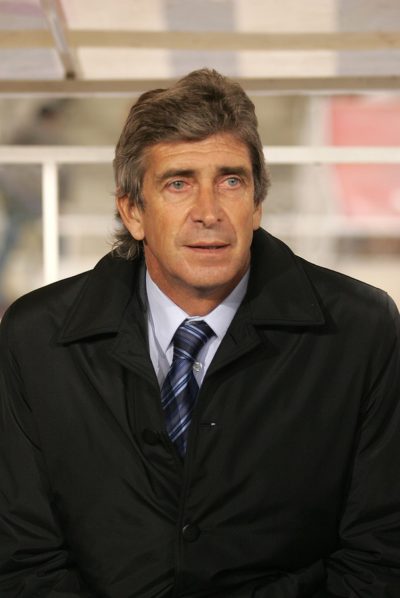 Pellegrini in 2008, photo by Maxisports/Bigstock.com

Manuel Pellegrini is a Chilean professional football manager and footballer. He won the English Premier League title in 2014 as coach of Manchester City.

Manuel is the son of Silvia Ripamonti Barros and Emilio Pellegrini Portales.

He descends from Colonel William de Vic Tupper Brock (known as Guillermo Tupper in Spanish), who was born, c. 1800, in Guernsey, Channel Islands (or Scotland), and died in the Chilean War of Independence.

Manuel is a fifth cousin, once removed, of actor Santiago Cabrera. Manuel’s great-great-great-great-great-grandmother, María Ignacia Isidora Zegers Montenegro (known as Isidora Zegers), was also the four times great-grandmother of Santiago Cabrera. Isidora was a prominent artist and composer in Chile; she was born in Madrid, Spain, and was the daughter of Juan Francisco Zegers Durás, who was born, c. 1781, in France, and of Florencia Montenegro Rodríguez de Toledo, who was born, c. 1785, in Madrid. Isidora was married to Manuel’s ancestor Colonel William de Vic Tupper Brock. This Zegers family are Flemish Belgians.

Manuel’s maternal grandfather was Julio Ripamonti Corominas (the son of Higinio Ripamonti Vigil and Dolores Corominas Clusellas). Julio was born in La Serena, Chile. Higinio was the son of Alejandro Ripamonti Fernandez and Venencia Vigil y Antelo. Ripamonti is an Italian surname, but that branch of Manuel’s family comes from A Coruña, Galicia, Spain. Dolores was the daughter of José Corominas and Francisca Clusellas.