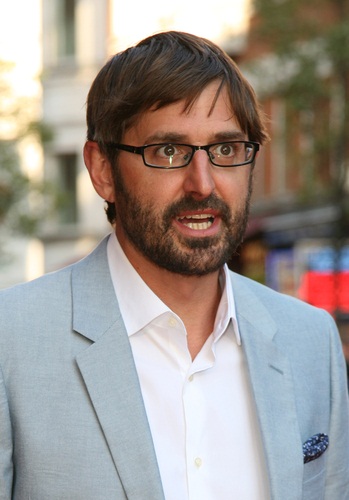 Louis Theroux is a British documentary filmmaker and broadcaster.

He was born to an American father, of French-Canadian and Italian descent, and an English mother. His father, Paul Theroux, is a travel writer and novelist. He is a nephew of novelist and poet Alexander Theroux, author Peter Theroux, and novelist and educator Joseph Theroux. His brother is journalist and documentary filmmaker Marcel Theroux. His first cousin is actor and writer Justin Theroux. He is married to Nancy Strang, with whom he has three children.

Louis’s paternal grandmother was Annina/Anna/Anne Francesca/Frances Dittami (the daughter of Alessandro/Alexander Louis Dittami and Angelina/Angela M. Calesa). Annina was born in New York, of Italian ancestry. Alexander was from Ferrara, Emilia-Romagna, Italy. Angelina was from Piacenza, also in Emilia-Romagna, and was the daughter of Francesco Bonifacio Calesa and Ermengilda Buongioni.

Sources: Genealogy of Louis Theroux (focusing on his father’s side) – http://www.geni.com

Genealogy of Louis’s paternal grandfather, Albert-Eugene Theroux (through Albert-Eugene’s brother) (focusing on his own father’s side) – https://www.wikitree.com