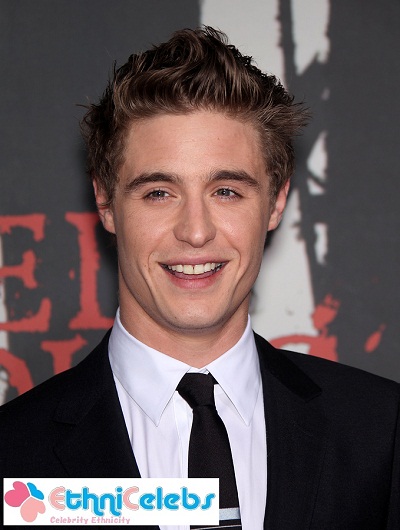 Irons in 2011, image via DFree/Bigstock.com

Max Irons is a British actor and model. His roles include Red Riding Hood, The Runaway, The Host, The Riot Club, Woman in Gold, The Wife, Crooked House, and Terminal.

He is the son of actors Jeremy Irons (Jeremy John Irons) and Sinéad Cusack (Sinéad Moira Cusack). His brother is photographer Samuel Irons and his half-brother is Irish politician Richard Boyd Barrett. He is the nephew of actresses Niamh Cusack and Sorcha Cusack and theatre producer Pádraig Cusack.

His father is English (with some distant Irish and Scottish roots) and his mother is Irish (with about one quarter English roots).

Max’s paternal grandfather was Paul Dugan Irons (the son of Charles David Irons and Ada Beatrice Dugan). Paul was born in Croydon, Surrey, England. Charles was the son of George William Irons and Minnie A. Ada was the daughter of Edward Thomas Dugan and Eliza Martha Richardson.

Max’s paternal grandmother was Barbara Anne Brereton Sharpe (the daughter of Henry Curtis Sharpe and Lilian Kate Wilton). Barbara was born in Epsom, Surrey, England. Henry was born in Dublin, Ireland, to a mostly English family. He was the son of William Durrant/Durand Atkinson Sharpe and Catherine/Katherine Loftie Rutton. Lilian was the daughter of Leonard Wilton and Elizabeth Kate Cozens Edwards.

Max’s maternal grandfather was Cyril James Cusack (the son of James Walter Cusack and Alice Violet Cole). Cyril Cusack, who was also an actor, was born in Durban, Natal, South Africa, to a father from Ireland and a mother from England.

Genealogy of Jeremy’s father (focusing on his own mother’s side) – https://www.wikitree.com

Max’s father’s appearance on Who Do You Think You Are?, 2006 – http://www.whodoyouthinkyouaremagazine.com