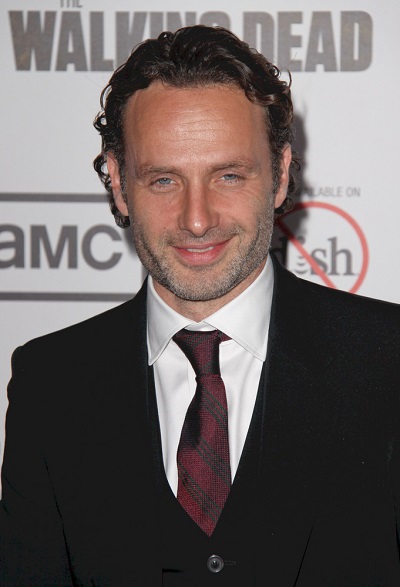 Lincoln in 2012, photo by Prphotos.com

Andrew Lincoln is an English actor.

His father is an English civil engineer and his mother is a South African nurse. He grew up in Hull and moved to Bath at the age of ten. Andrew attended Beechen Cliff School where, at the age of fourteen, he had his first acting role, playing the Artful Dodger in a school production of Oliver Twist. He spent a summer at the National Youth Theatre in London and became interested in acting as a career. After leaving school, he studied at the Royal Academy of Dramatic Arts (RADA), and began to use the stage name Andrew Lincoln.

His birth name, Clutterbuck, can be English.

Andrew is married to Gael Anderson, with whom he has two children. Gael is the daughter of flautist and vocalist Ian Anderson.

Andrew’s maternal grandfather was Charles “Jas” Bekker (the son of Simon Potgieter/Potgeiter Bekker and Charlotte Bailie/Bailey Lucas). Charles was born in Ermelo, Transvaal, South Africa, and was of three quarters Afrikaner descent. Simon was the son of Pieter Jacobus Bekker and Aletta Cecilia Bosch. Charlotte was the daughter of Charles Bailie Lucas, who was of English and Scottish ancestry, and of Isabella Elizabeth Vogel.

Source: Genealogy of Andrew Lincoln (focusing on his mother’s side) – https://www.geni.com