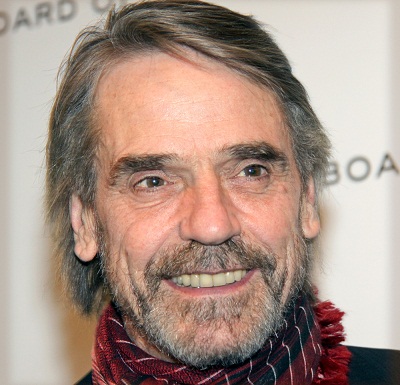 Jeremy Irons is an English actor. He won the Academy Award for Best Actor for Reversal of Fortune (1990). He is also known for his leading roles in the films The French Lieutenant’s Woman, Moonlighting, Dead Ringers, The Lion King, Die Hard with a Vengeance, and Lolita, among many others.

Jeremy is the son of Barbara Anne Brereton (Sharpe) and Paul Dugan Irons. He is married to Irish actress Sinéad Cusack (Sinéad Moira Cusack). Among their two children is actor Max Irons. Aside from his English ancestry, he uncovered that he had an Irish ancestor while on the U.K. genealogy series Who Do You Think You Are? (2006).

Jeremy’s paternal grandfather was named Charles David Irons (the son of George William Irons and Minnie A.). Charles was born in Chelsea, London, England. George was the son of Thomas Irons and Catherine Anne Brown.

Jeremy’s paternal grandmother was Ada Beatrice Dugan (the daughter of Edward Thomas Dugan and Eliza Martha Richardson). Ada was born in Kings Norton, Worcestershire, England. Edward was the son of James John Dugan. Eliza was the daughter of George Richardson.

Jeremy’s maternal grandfather was Henry Curtis Sharpe (the son of William Durrant/Durand Atkinson Sharpe and Catherine/Katherine Loftie Rutton). Henry was born in Dublin, Ireland, to a mostly English family. William was the son of The Rev. Samuel Curtis Sharpe and Maria Palmer. Katherine was the daughter of Henry Loftie Rutton and Catherine Franklin/Franklyne McCreight, who was born in Gilford, Banbridge, Northern Ireland.

Jeremy’s matrilineal line can be traced to Rose Nunn, who was born, c. 1743, in Essex, England.

Genealogy of Jeremy Irons (focusing on his mother’s side) – https://www.wikitree.com

Jeremy’s appearance on Who Do You Think You Are?, 2006 – http://www.whodoyouthinkyouaremagazine.com