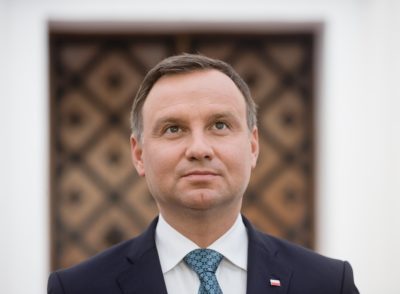 Duda in 2015, photo by palinchak/Bigstock.com

He is the son of Janina (Milewska) and Jan Tadeusz Duda. He is married to teacher Agata Kornhauser-Duda, with whom he has a daughter.

Andrzej’s patrilineal ancestry can be traced back to his third great-grandfather, Jan Duda.

Andrzej’s maternal grandfather was Nikodem Józef Milewski (the son of Aleksy Nikodem Milewski and Joanna Mrozowska). Nikodem was born in Warszawa, Mazowieckie. Aleksy was the son of Leon Milewski and Antonina Czermińska. Joanna was the daughter of Ludwik Mrozowski and Felicja Romanowska.