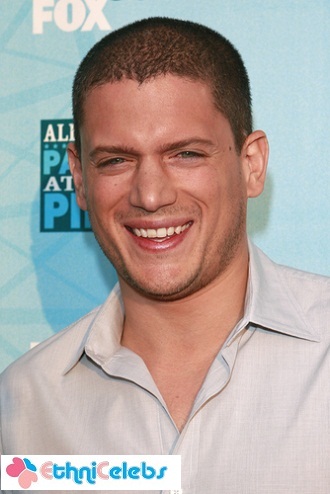 Wentworth Miller is an American actor, model, screenwriter, and producer. He starred in the television series Prison Break, playing Michael Scofield, and is also known for his roles in the films The Human Stain, Underworld, and Resident Evil: Afterlife, and for writing the film Stoker. He has also used the pseudonym Ted Foulke.

Wentworth’s maternal grandfather was Frederick William Palm (the son of Hendrik/Hendrick “Harry” Frederik Palm and Melekia/Malakia “Margaret” Sabah). Wentworth’s grandfather Frederick was born in New York. Hendrik was born, in 1894, in Willemstad, the capital city of the Caribbean island of Curaçao, the son of Frederick/Frederik Wilhelm Palm, a merchant, and of Maria Josefa Helena “Elene” Conquet, who was born in Santo Domingo. Hendrik’s family had lived on Curaçao for many generations. His ancestry was Dutch (like many people on this island), along with French, Swedish, Hispanic, and remote Polish, with a forebear who was born in Brazil, and who was likely ethnically Dutch. The Palm line originated in Sweden. Wentworth’s great-grandmother Melekia was born in New York. Her parents, Namaan/Naman/Nemen Sabah and Emiline/Emileen/Emily Saba, were emigrants from Beirut, Lebanon. Nemen was the son of Michael Sabah and Anesa Haddad. Emily was the daughter of Abraham Saba and Sada/Saadie Abositty/Abste. This makes Wentworth himself of one eighth Lebanese descent.