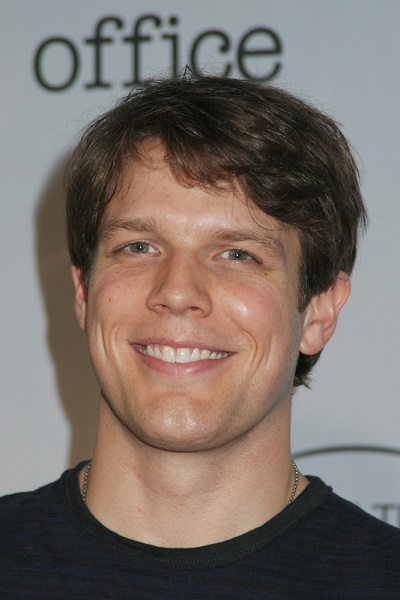 Jake Lacy is an American actor. His roles include the series Better with You, I’m Dying Up Here, and The White Lotus.

Jake was raised in Pittsford, Vermont. He is married to Lauren Deleo, with whom he has two children.

Jake’s paternal grandfather was John Willoughby Lacy (the son of Clive Woodbury Lacy and Mona Bellingham Matthews). John was born in Massachusetts, to parents from Iowa. Clive was the son of Benjamin William Lacy and May Goddard Robinson. Mona was the daughter of Alphonse/Alphons Matthews, whose parents were Irish, from Dublin and Tipperary, and of Amelia Bowdish, who was Canadian.

Jake’s paternal grandmother was Barbara Muther (the daughter of Robert Walter Muther and Gertrude Helen Bird). Barbara was born in Massachusetts. Robert was the son of Lorenz Franz Muther, who was Austrian, from Tyrol, and of Louise Ebert, who was born in Illinois, to German parents. Gertrude was the daughter of Charles Lord Bird and Carrie Vander Hayden Bacon.

Jake’s maternal grandfather was Richard Pearce Griffin (the son of Harold Graham Griffin and Edith Linwood Pearl). Richard was born in Massachusetts. Harold was the son of Frank Osborne Griffin and Annie M. Graham, who was from Nova Scotia, Canada.

Jake’s great-grandfather Harvey Hitchcock was the son of Edward Griffin Hitchcock, a law enforcement officer who rose to the position of Marshal of the Republic of Hawaii, and of Mary Tenney Castle; Edward’s father was missionary Harvey Rexford Hitchcock. Mary was the daughter of businessperson and politician Samuel Northrup Castle. Mary’s aunt, her mother’s sister and Jake’s great-great-great-great-aunt, was missionary and philanthropist Mary Tenney Castle, who later became her stepmother. Harvey’s cousin, who is Jake’s first cousin, three times removed, was painter D. Howard Hitchcock (David Howard Hitchcock).

Jake’s great-grandmother Eliza Hennessey was the daughter of James KaKe po’okalani Hennessey and Mary Mele Kane’alai Kaina/Keaweolu, and was of somewhere between half and full Native Hawaiian ancestry.

Genealogy of Jake Lacy (focusing on his father’s side) – http://worldconnect.rootsweb.ancestry.com