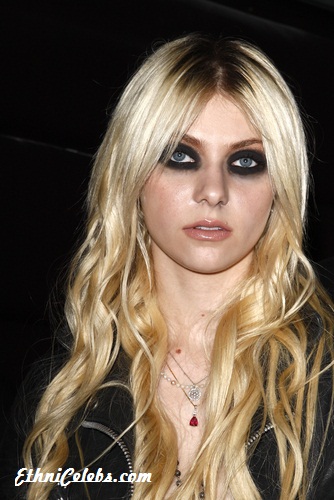 Taylor Momsen is an American singer, songwriter, model, and actress.

Taylor is the daughter of Colette and Michael Momsen.

Her mother’s ancestors were ethnic Germans who lived in Odessa, then in the Russian Empire, now in Ukraine, and elsewhere in the Empire. Because of this, Taylor has stated: “I’m Russian… My distant ancestors came from Russia.”

The surname Momsen has a German origin and is also common in Sweden and Denmark.

Taylor’s paternal grandfather is Marc Frank Momsen (the son of Warren Frederick Momsen and Dorothea Bertha Inbusch Frank). All of Marc’s great-grandparents were emigrants from Germany. Warren was the son of Otto William Momsen and Ida/Ada C. Bibow. Dorothea was the daghter of Herman Otto Frank and Bertha Mathilde Inbusch.

Taylor’s maternal grandfather is Joseph Leiphon (the son of Paul Nick Leibham/Leiphon and Magadelena/Magdalena “Lena” Rombs). Paul and Magadelena were ethnic Germans from the Russian Empire, of the Roman Catholic religion. They settled in North Dakota, eventually living in Devils Lake. Paul was born in Odessa, the son of Alexander Leibham/Leiphon and Elizabeth Steffan. Magadelena was the daughter of Joseph Rombs and Angela.

Taylor’s maternal grandmother is Donna Senger (the daughter of Anton Wendelin Senger and MaryAnn/Mary Axtman). Anton was the son of Wendelin Leo Senger and Franziska Fettig. MaryAnn was the daughter of Franz “Frank” Axtmann and Gunigunda “Gina” Kistner.

Genealogy of Taylor Momsen (focusing on her father’s side) – http://www.frankseyffardt.com