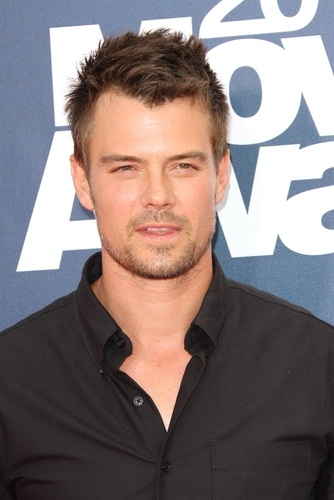 Duhamel in 2011, image by s_bukley / Shutterstock.com

Ethnicity: German (about half), as well as one eighth Norwegian, 1/16th French-Canadian, and Irish, English, and Austrian

Josh Duhamel is an American actor and fashion model. His roles include the films Win a Date with Tad Hamitlon!, Transformers, and several of its sequels, When in Rome, Turistas, Safe Haven, Love, Simon, and Think Like a Dog, and the show Las Vegas.

His father, Larry David Duhamel, is of one eighth French-Canadian descent, along with German, English, Norwegian, and Irish. Josh’s mother, Bonita/Bonnie/Bonny L., is of mostly German, and some English and Austrian, ancestry. His surname means “from the hamlet” in French. Josh has a son with his former wife, singer and actress Fergie.

An AncestryDNA test whose results were displayed on the show Who Do You Think You Are? (2018) stated that Josh’s genetic ancestry is:

Josh’s paternal grandfather was Lawrence Louis “Larry” Duhamel (the son of Louis William Duhamel and Agnes Catherine/K. Rader). Lawrence was born in Kenmare, North Dakota. Josh’s great-grandfather Louis was the son of William Brassar Duhamel, who was French-Canadian, from Ontario, and of Mary Jane O’Brien/O’Brian, whose parents were Irish. Agnes was the daughter of German parents.

Josh’s maternal grandfather was Walter John Bachmeier (the son of Daniel/Dan Bachmeier and Theresia Sander). Walter was born in North Dakota. Daniel was an ethnic German from Russia. Theresia was born in North Dakota, the daughter of ethnic German parents from the Russian Empire, Rochus Sander/Saudar, from Selz, Kutschurgan Colony, and Theresia/Trieca/Theresa Bartsch, who was also from the Odessa area.

Sources: Josh’s appearance on Who Do You Think You Are?, 2018 – https://www.youtube.com

Genealogy of Josh Duhamel (focusing on his father’s side) – http://freepages.genealogy.rootsweb.ancestry.com

Genealogy of Josh’s maternal grandfather, Walter John Bachmeier (focusing on his own mother’s side) – https://www.findagrave.com

Genealogy of Josh’s maternal great-great-grandmother, Theresia/Trieca/Theresa Bartsch (focusing on her mother’s side) – http://worldconnect.rootsweb.ancestry.com