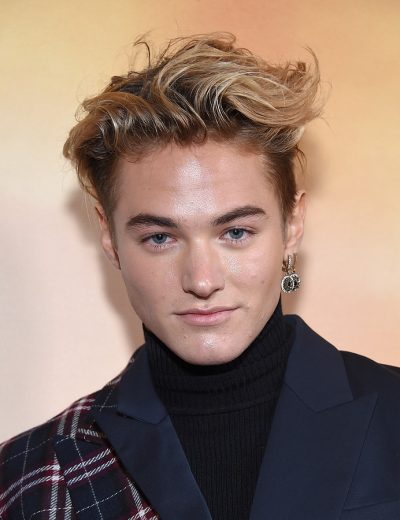 Hoog in 2019, photo by DFree/Bigstock.com

Mitchell Hoog is an American actor. He is known for starring as Mac Morris on the Saved by the Bell sequel series, and for films including Freaky (2020).

Mitchell’s paternal grandfather is Thomas William Hoog (the son of Leo Joseph Hoog and Edna Mary Basler). Thomas is of German descent. Leo was the son of Thomas Simon Hoog and Emma Mary Amelia Bauman/Baumann. Edna was the daughter of William Basler and Sophia Mary Friedman/Friedmann.

Mitchell’s paternal grandmother was Sandra Gray Garrett (the daughter of George Redmond Garrett and Thelma H. Vallia). Sandra was born in Florida. George was the son of Samuel Garrett and Ruby Redmond. Thelma was the daughter of Wayman O. Vallia and Katie B. Matchett, and had French-Canadian, Irish, and English ancestry.

Mitchell’s maternal grandfather likely was Luther Rasmussen (the son of Erlenn Erwin “Ras” Rasmussen and Marion E. Hemmingson). Luther was of Norwegian descent. Erlenn was the son of Oscar Rasmussen and Orphie Flatten. Marion was the daughter of Peter Hemmingson and Nellie Lien.