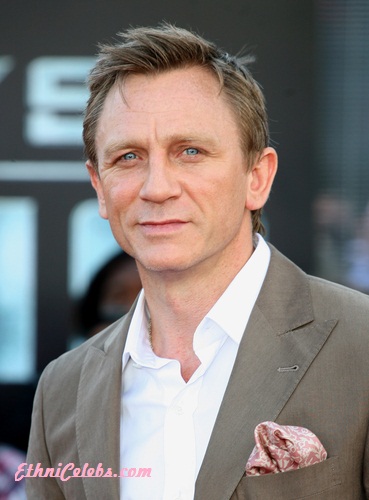 Craig in 2011, photo by Featureflash / Shutterstock.com

Daniel Craig is a British actor. He is known for playing James Bond, and for his roles in The Girl with the Dragon Tattoo (2011), Knives Out, Munich, Defiance, and Layer Cake, among many other films.

Daniel is the son of Carol Olivia (Williams) and Timothy John Wroughton Craig. He has English, Welsh, Scottish, Irish, and distant French/French Huguenot, ancestry. His father was born in Aled, Denbighshire, Wales. Daniel is a descendant of Daniel Chamier (1660-1698), a French Huguenot minister, and of Sir William Burnaby, 1st Baronet (c. 1710-1776), a naval officer.

Daniel’s paternal grandmother was Rosalind/Rosalinde Maud Jones (the daughter of Howard Edward Jones and Rosa/Rosalinda Zieman/Ziemann Smith). Daniel’s grandmother Rosalind was from Llandudno, Wales, though most of her parentage was not Welsh. Howard was the son of John Edward Jones and Marian Kate Leverett. Daniel’s great-grandmother Rosa was the daughter of Charles Mayvore Smith and Grace Matilda Wroughton, who were born in India (Grace in Madras), of English origin.

Genealogy of Daniel Craig (focusing on his father’s side) – https://www.geni.com