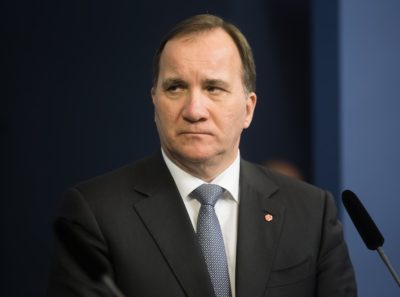 Löfvén in 2016, photo by palinchak/Bigstock.com

Stefan Löfvén is a Swedish politician. He has been Prime Minister of Sweden, since 3 October, 2014, and Leader of the Social Democrats, since 27 January, 2012. He is the biological son of Siri Margareta Löfven and Karl Alvar “Kalle” Hedberg. He was later put into the foster care of Iris Virgina (Söderlund) and Ture Valdus Melander. Prime Minister Löfvén is married to Ulla Löfvén (born Ulla Margareta Arvidsson).

Prime Minister Löfvén has remote Finnish ancestry, in the 1600s. He is also a descendant of Jean Frumerie (1634-1689), who was the mayor of Nora and Linde. Jean’s father was Dutch, from Leiden, Holland, and Jean’s mother was of Swedish and Belgian Walloon descent.

Prime Minister Löfvén’s maternal grandfather was Ludvig Löfven (the son of Per Jonsson Löfven and Karin Larsdotter). Ludvig was born in Råda, Ekshärad, Värmland. Per was the son of Jon Persson Löfven and Anna Olsdotter. Karin was the daughter of Lars Larsson Finne and Marit Svensdotter.