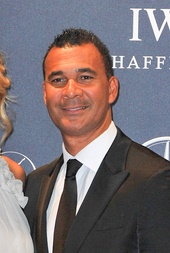 Ruud Gullit is a Dutch football manager and footballer. He was named the World Soccer Player of the Year in 1987 and 1989.

He is the son of Ria Dil and George Gullit. His father is a Surinamese immigrant. His mother was his buitenvrouw (Dutch for “mistress”) from the Jordaan district of Amsterdam. His father worked as an economics teacher at a local school, and his mother was a custodian at the Rijksmuseum.

He has six children.