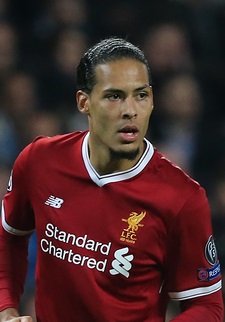 van Dijk in 2018, photo by sportsphotographer.eu/Bigstock.com

Ethnicity:
*father – Dutch
*mother – Surinamese, including African and some Chinese

Virgil van Dijk is a Dutch footballer. He plays as a centre back for Premiership club Liverpool and is captain of the Netherlands national football team. He holds the world record transfer fee for a defender at £75 million.

His maternal great-great-grandfather is said to have been Chin Fo Sieeuw, a Chinese immigrant to Suriname, around 1920.