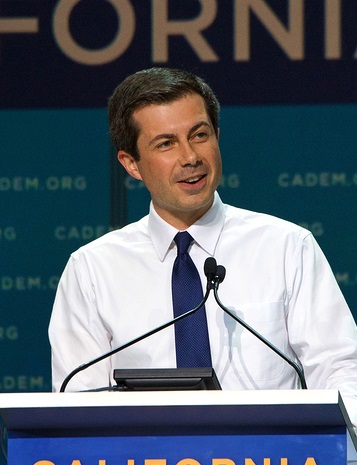 Buttigieg in 2019, photo by Sheila_F/Bigstock.com

Pete Buttigieg is an American politician. A member of the Democratic Party, he has served as U.S. Secretary of Transportation, since February 3, 2021, and, previously, as Mayor of South Bend, Indiana, from January 1, 2012 to January 1, 2020. He is a military combat veteran and Naval Intelligence Officer, having deployed to Afghanistan during his time as Mayor.

Pete is the son of Jennifer Anne (Montgomery) and Joseph Anthony Buttigieg II. His parents are/were professors, at The University of Notre Dame in South Bend. His father, who was born in Ħamrun, Malta, was a literary scholar and translator, who initially studied to be a Jesuit priest. Pete’s surname, Buttigieg, is a Maltese name of Semitic origin, with “tigieg” being a Semitic designation for “poultry.”

Pete’s mother, who was born in Stanislaus, California, is from a family from Indiana and Oklahoma, and has English, Scottish, German, and more distant Swiss-German, Welsh, and Cornish, ancestry.

Of his own background, Pete has stated:

Most people have trouble pronouncing my name, so they just call me “Mayor Pete.” My surname, Buttigieg (Boot-edge-edge), is very common in my father’s country of origin, the tiny island of Malta, and nowhere else. Dad came to America in the 1970s and became a citizen; he married my mother, an Army brat and umpteenth-generation Hoosier, and the two of them settled in South Bend, Indiana, shortly before I was born…

His father was Catholic and his mother is of Methodist background. Pete was baptized Catholic. He is a practicing Christian, in the Episcopalian denomination.

Pete is the first person of Maltese heritage to have mounted a notable campaign for a major party’s nomination for President of the United States.

He is also one of the first three people born in the 1980s to have run a prominent campaign for a major party’s nomination for President of the United States, along with Tulsi Gabbard and Eric Swalwell, all of whom sought the 2020 Democratic nomination.

Pete’s paternal grandmother was Maria Concetta “Cettina” Portelli (the daughter of Francesco Portelli and Cetta Saliba). Maria was born on Malta. Cetta was the daughter of Joseph/Giuseppe Saliba and Paola/Paolina Mintoff.

Pete’s maternal grandmother was Zoe Anne Neal (the daughter of William Caswell “Will” Neal and Maye Louise Rasar). Zoe was born in McAlester, Pittsburg, Oklahoma. William was the son of William Henry Neal and Lena Chase. Maye was the daughter of George William Rasar and Annie Wooly.

Sources: Information about Pete’s reception in and connection to Malta – https://www.thedailybeast.com
https://www.washingtonpost.com