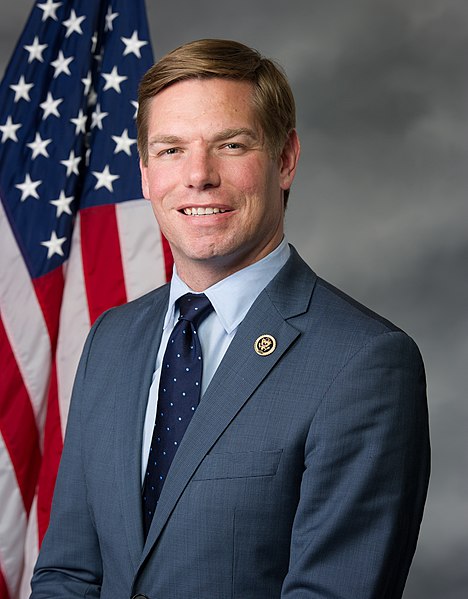 Eric Swalwell is an American politician. A member of the Democratic Party, he has been a Member of the U.S. House of Representatives from California, since January 3, 2013. He was previously a member of the Member of the Dublin City Council, from December 2010 to January 2, 2013.

He was born in Sac City, Iowa, and was raised in Dublin, California. Eric is the son of Vicky Joe (Erickson) and Eric Nelson Swalwell, who was police chief of Algona, Iowa. He is married to sales director Brittany Ann Watts, with whom he has two children.

Eric is one of the first three people born in the 1980s to have run a prominent campaign for a major party’s nomination for President of the United States, along with Tulsi Gabbard and Pete Buttigieg, all of whom sought the 2020 Democratic nomination.

Eric is also the first person of significant Portuguese heritage to have mounted a notable campaign for a major party’s presidential nomination.

Eric’s maternal grandfather was Delbert Loraine Erickson (the son of Gustav Erickson/Ericksson and Johanna Johnson). Delbert was born in South Dakota, to Swedish parents. Gustav was the son of Johan Ericksson and Lovisa, who were born in Dalarna. Johanna was the daughter of Erik Matsson/Johnson and Anna Marie Matsdotter, who were born in Leksand, Dalarna, Sweden.

Genealogy of Eric Swalwell (focusing on his father’s side) – http://laurenandtristan.net