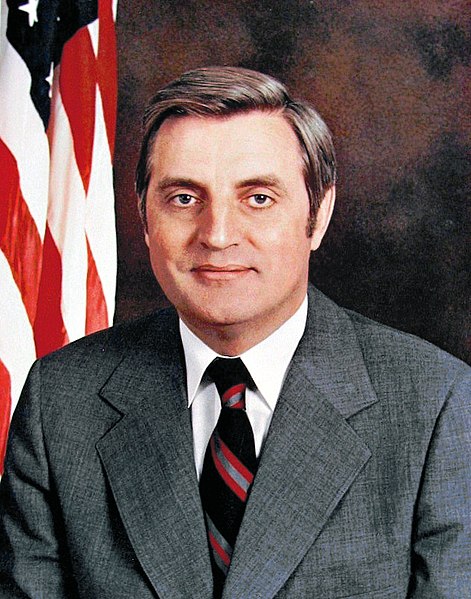 Ethnicity:
*father – Norwegian, along with remote Danish and German
*mother – Scottish, as well as English and German

Vice President Mondale was the son of Claribel Hope (Cowan), a music teacher, and The Rev. Theodore Sigvaard/Sigvard/Sigurd Mondale, a Methodist minister. His father was born in Bricelyn, Minnesota, to Norwegian parents. His mother was born in Pringhar, Iowa, and her ancestry was Scottish, English, and German. His maternal grandfather was born in Canada.

Vice President Mondale was married to artist and author Joan (Adams) Mondale, until her death. Joan was the daughter of a Presbyterian minister. The couple had three children, including politician and entrepreneur Ted Mondale, who was a Member of the Minnesota Senate, from 1991 to 1997; and radio personality, television host, and actress Eleanor Mondale. His half-brother was The Rev. Lester Mondale, a Unitarian minister.

One other person of heavily Scandinavian ancestry has served as Vice President of the United States, Hubert Humphrey, from January 20, 1965 to January 20, 1969. He was also a member of the Democratic Party.

Hubert Humphrey and Walter Mondale were also the two people of heavily Scandinavian ancestry who were nominated for President of the United States by a major political party, with Humphrey’s nomination being in 1968, both by the Democratic Party.

Mondale was also the Democratic Party’s nominee for re-election as Vice President in 1980. Aside of Humphrey and Mondale, two people of heavily Scandinavian ancestry were nominated for Vice President of the United States by a major American political party. They were:
*Earl Warren (1948; Republican; Warren was of Norwegian and Swedish descent)
*Lloyd Bentsen (1988, Democratic; Bentsen’s father was of Danish descent)