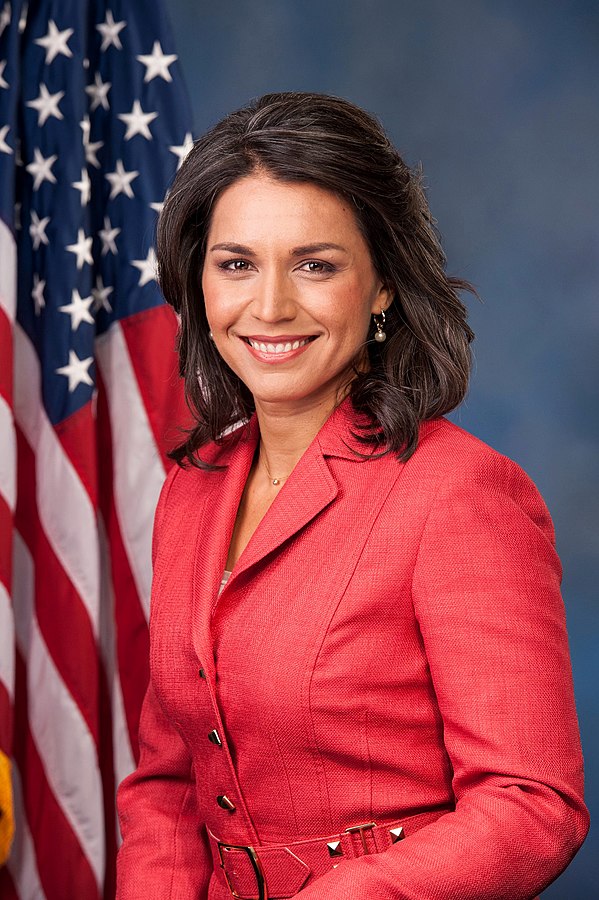 Tulsi Gabbard is an American politician. A member of the Democratic Party, she served as a Member of the U.S. House of Representatives from Hawaii, from January 3, 2013 to January 3, 2021. She is a military veteran.

Tulsi was born in Leloaloa, American Samoa, U.S., the daughter of Carol (Porter) and Mike Gabbard (Gerald Michael Gabbard), who has been a Member of the Hawaii Senate, since 2006. Tulsi is married to cinematographer and editor Abraham Williams.

Tulsi’s mother was born in Decatur, Indiana, to a European-American family, and was raised in Michigan. Much of Tulsi’s European ancestry, on both sides, is German, with her mother being of at least three quarters German descent. Tulsi’s family moved to Hawaii when she was two years old.

The name Tulsi means the holy basil, a plant sacred in Hinduism.

Tulsi is a practicing Hindu, following the Gaudiya Vaishnavism. She is the first Hindu member of the U.S. Congress. Her father is Catholic and her mother is Hindu. She chose the Hindu faith as a teenager.

A DNA test whose results were displayed on the show Finding Your Roots with Henry Louis Gates, Jr. (2019) stated that Tulsi’s genetic ancestry is:

Tulsi is one of the first three people born in the 1980s to have run a noted campaign for a major party’s nomination for President of the United States, along with Pete Buttigieg and Eric Swalwell, all of whom sought the 2020 Democratic nomination.

Tulsi is also the first person of Polynesian heritage to have mounted a notable presidential campaign. Additionally, she is one of three people who were at least partly raised in the Hindu faith to have run for a major party’s presidential nomination. Bobby Jindal, who sought the Republican Party’s 2016 nomination; and Kamala Harris, who also sought the Democratic Party’s 2020 nomination, and began serving as Vice President of the United States in 2021, are the others. Of the three, only Tulsi is a practicing Hindu.

Tulsi’s paternal grandmother was Aknesis Agnes “Pako” Yandall (the daughter of Robert/Lopati Louis Yandall and Palepa Barbara Su’a Wolf). Aknesis was born in Leloaloa, Tutuila, American Samoa. Robert was the son of Louis Robert Yandall, who was born in Matautu, Apia, Upolu, Samoa, to a father from London, England, and to a Samoan mother; and of Tafia’u Tofa. Palepa was the daughter of Tipene/Tipeni Su’a.

Tulsi’s maternal grandfather was William Irwin Porter (the son of Lewis Franklin Porter and Wilhelmina/Wilhelmine R. “Minnie” Remp). William was born in Georgia. Lewis was the son of John McBride Porter and Ella Palmer. Wilhelmina was of German descent, and was the daughter of Johannes Remp and Catharina Knaus.