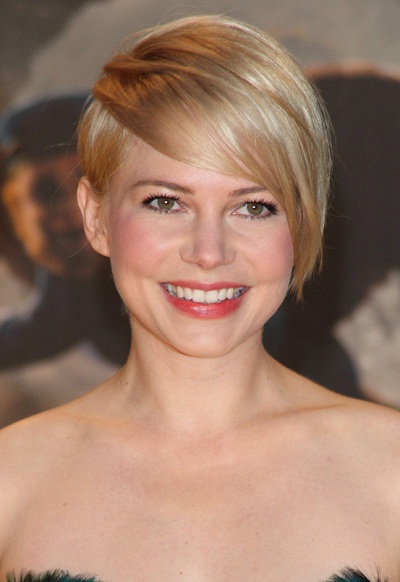 Williams in 2013, image via Prphotos.com

Michelle Williams is an American actress. She has had leading roles in Brokeback Mountain, Blue Valentine, My Week with Marilyn, Manchester by the Sea, and The Fabelmans, all of which she has been nominated for an Oscar for; as well as in Lassie, Halloween H20: 20 Years Later, Dick, But I’m a Cheerleader, Me Without You, The Station Agent, The Hottest State, I’m Not There, Synecdoche, New York, Wendy and Lucy, Shutter Island, Oz the Great and Powerful, Certain Women, Wonderstruck, The Greatest Showman, All the Money in the World, I Feel Pretty, and the Venom films, among many other works.

Michelle is the daughter of Carla Ingrid (Swenson) and Larry Richard Williams, an author, stock and commodity trader, and politician, who was the Republican Party’s nominee for the U.S. Senate from Montana, in 1978 and 1982. Michelle’s father is of one half Norwegian, one quarter German, and approximately one quarter English, ancestry, along with distant Scottish roots. Michelle’s mother is of three eighths Norwegian, one eighth Swedish, one eighth Swiss-German, one eighth Danish, possibly one eighth English, one sixteenth Welsh, and one sixteenth Scottish, ancestry. Thus, Michelle is of 43.75% Norwegian ancestry.

Her family moved to San Diego, California, when she was nine.

Michelle is married to film and theatre director Thomas Kail. She has a daughter with her former partner, late actor Heath Ledger; and two children with Thomas.

Michelle’s paternal grandfather was Richard Sigwart Williams (the son of Lloyd Garfield Williams and Mae/May Elizabeth Sigwart). Richard was born in Montana. Lloyd was born in Wisconsin, the son of Frank Thomas Williams and Mary Adelaide Thurston, and had English, and distant Scottish, ancestry. Mae was born in Missouri, the daughter of Gustav/Gus W. Sigwart and Gussie Boehme, and had German ancestry.

Michelle’s maternal grandmother was Doris T./I. Reiquam (the daughter of William Daniel Reiquam and Bessie Perry Crane). Doris was born in Montana. William was born in Minnesota, the son of Norwegian parents, Kristoffer/Christopher Andreas Reiakvam/Reiquam and Ane/Annie Sophie Stephine Danielson, who were from Naustdal, Sogn og Fjordane. Michelle’s great-grandmother Bessie was born in Montana, the daughter of Charles Perry Crane, who was born in Indiana, and had English ancestry; and of Elizabeth Inga Balstad, who was Norwegian, with parents from Rendalen, Hedmark.

Genealogy of Michelle Williams (focusing on her father’s side) – http://familytreemaker.genealogy.com