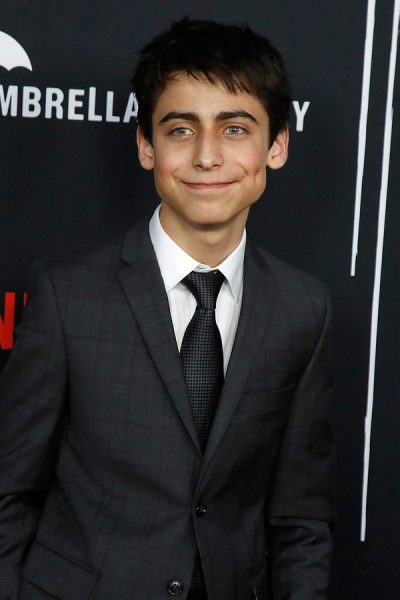 Gallagher in 2019, photo by kathclick/Bigstock.com

Aidan Gallagher is an American actor, singer, and U.N. Environment Goodwill Ambassador for North America. He is known for his leading roles on the shows Nicky, Ricky, Dicky & Dawn and The Umbrella Academy. He was the most searched-for person on IMDB for much of August 2020.

Aidan has stated that he is Jewish. His father is from a Mormon (LDS) family. His mother is Jewish.

Aidan’s paternal grandfather was William Kneeland Gallagher (the son of Leonard Wines Gallagher and Sara Bertha Roberts). William was born in California. Leonard was born in Butte, Silverbow, Montana, the son of Frank Melville Gallagher and Margaret Julia Hall. Sara was the daughter of Nathaniel Embury Roberts and Selma Cecelia Hanson, whose own father was born in Oslo, Norway.

Aidan’s paternal grandmother is the daughter of Robert Elmer Jones and Meryl Dunn. Robert was the son of Thomas M. Jones, Jr. and Matilda McFarland, whose own father was born in Dysart, Fife, Scotland, and whose own mother was born in Málaga, Andalusía, Spain, to an English father and a Scottish mother. Aidan’s great-grandmother Meryl was the daughter of Charles Welch Dunn and Lula Magdalena Schenk, whose own parents were Swiss, of Swiss-German descent, her father from Eggiwil, Bern and her mother from Walkringen, Bern.

Aidan’s maternal grandfather was Michael Spencer Rifkin (the son of Arthur Rifkin and Anna/Anne/Ann Swirsky). Michael was born in New York, and was of Russian Jewish descent.

Aidan’s maternal grandmother was Anita Haimowitz (the daughter of Joseph Haimowitz and Rose I. Potash). Anita was born in New Jersey, to a Romanian Jewish father and a Polish Jewish mother. Rose was the daughter of Morris Potash and Anna Listow.