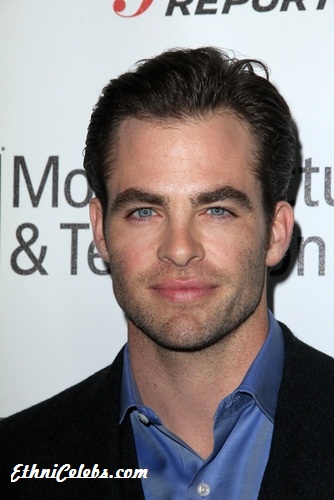 Pine in 2011, photo by s_bukley / Shutterstock.com

Chris Pine is an American actor. He is known for playing Capt. James Tiberius Kirk in the newer series of Star Trek films. Chris is the son of actors Roberts Pine (Granville Whitelaw Pine) and Gwynne Gilford (Gloria Gwynne Gilford), and the grandson of actress Anne Gwynne.

One family tree traces Chris’s Pine line back to William Pyne, who was born, c. 1580, in Woodbury, Devonshire, England.

Chris’s paternal grandmother was Virginia Whitelaw (the daughter of Donald Watts Whitelaw and Lucile Marie Foster). Virginia was born in Michigan. Donald was the son of Robert Glass Whitelaw, who was born in Ohio, to Canadian parents, and of Johanna Frank, who was German. Lucile was the daughter of Arthur L. Foster and Myrtie Seagraves/Seagreaves.

Notations on the ancestry of Chris’s maternal great-grandmother, Pearl Guinn, and on Pearl’s parents – http://archiver.rootsweb.ancestry.com