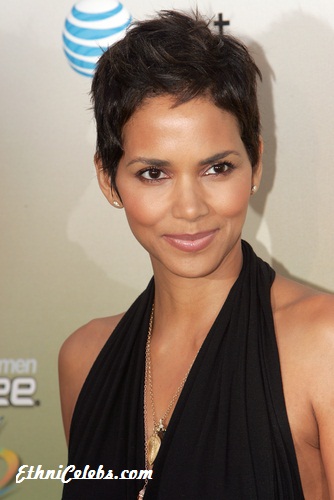 Berry in 2009, photo by CarlaVanWagoner / Shutterstock.com

Halle Berry is an American actress and model. She won the Academy Award for Best Actress for Monster’s Ball (2001). She is the only black actress to have won the Best Actress Oscar. Her roles also include The Last Boy Scout, The Flinstones, Executive Decision, Why Do Fools Fall in Love, X-Men, Swordfish, Die Another Day, Gothika, Things We Lost in the Fire, The Call, Kidnap, Kings, and Bruised, among others.

Halle’s father, Jerome Jesse Berry, was African-American. Halle’s mother, Judith Ann (Hawkins), is white, of English, some German and Irish, and distant Dutch, descent. She has two children, a daughter, with her former partner, Canadian model Gabriel Aubry, and a son, with her former husband, French actor Olivier Martinez.

Of her upbringing, Halle has said:

I was raised by my white mother and every day of my life I have always been aware of the fact that I am biracial. However, growing up I was aware that even though my mother was white, I did not look or feel very white myself.

Halle’s paternal grandmother was Cora Lee Powell (the daughter of Adam Powell and Charity Munford). Cora was born in Greenwood, Leflore, Mississippi. Adam was the son of Tom Powell and Easter.

Halle’s maternal grandfather was Earl Ellsworth Hawkins (the son of Eugene Allen Hawkins and Bessie C. Spaulding). Earl was born in Dover, Tuscarawas, Ohio. Eugene was the son of John William Hawkins, who was born in Vermont, and of Katherine/Catherina “Katie” Drescher, who was born in Bavaria, Germany. Bessie was the daughter of Ellsworth Warren Spaulding and Agnes L. “Aggie” Johnson, whose father was English. Through her maternal grandfather, Halle has American-born ancestors going back to the 1600s.

Halle’s maternal grandmother was Nellie Dicken (the daughter of Henry Dicken and Ada B. White). Nellie was born in Shardlow, Derbyshire, England, to a father from Chesterfield and a mother from Spondon. Henry was the son of Robert Dicken and Ann Marsden. Ada was the daughter of John White and Maria.

Genealogy of Halle Berry (focusing on her mother’s side) – https://www.geni.com