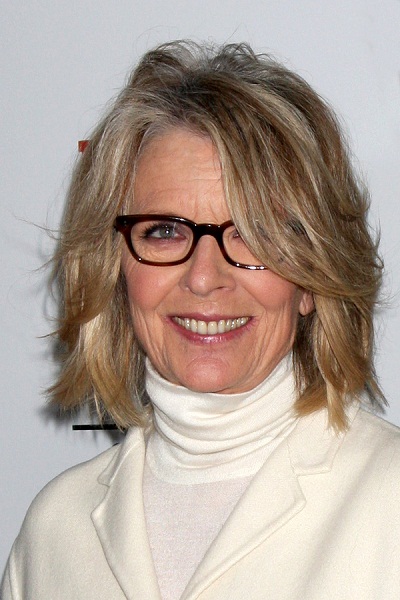 Keaton in 2012, image via kathclick/Bigstock.com

Diane Keaton is an American actress, writer, director, and producer. She won the Academy Award for Best Actress for Annie Hall (1977). She is also known for her roles in The Godfather, Love & Death, Looking for Mr. Goodbar, Reds, Baby Boom, Father of the Bride, and its sequel, The First Wives Club, and Something’s Gotta Give, among many others.

She is the daughter of Dorothy Deanne (Keaton) and John Newton Ignatius “Jack” Hall. Her father was from Nebraska and her mother was from Kansas. She has two children, who are adopted.

Diane’s paternal grandfather was Chester Newton Hall (the son of Arelious/Aurelious Creed/Charles Hall and Emma Mae Armstrong). Chester was born in Oklahoma. Arelious was the son of John Newton Hall and Catherine Virginia Read. Emma was the daughter of James Armstrong, who was born in Ireland, and of Elizabeth Maynes, whose parents were from Ulster, Ireland.

Diane’s maternal grandmother was Beulah Evinger (the daughter of George Frederick Evinger and Sarah Orpha Marcel/Marchel). Beulah was born in Kansas. George was the son of John Evinger, Jr. and Jane Elisa Yager. Sarah was the daughter of John Marchel and Catherine/Katherine Malinda Wolfe.

Genealogy of Diane Keaton (focusing on her mother’s side) – http://familypedia.wikia.com