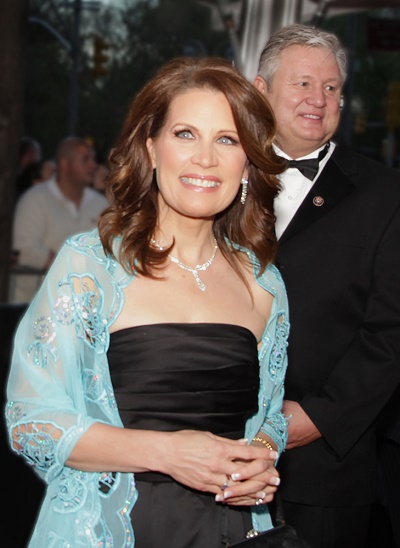 Bachmann with husband Marcus in 2011, photo by Prphotos.com

Michele Bachmann is an American politician. A Republican, she served as a Member of the U.S. House of Representatives from Minnesota, from January 3, 2007 to January 3, 2015.

She was a candidate for the Republican Party’s nomination for President of the United States in 2012.

Michele is the daughter of Arlene Jean (Johnson) and David John Amble. She is married to clinical therapist Marcus Bachmann, who is of Swiss descent, and with whom she has five children.

Michele has stated, “I’m an Iowegian. For those of you who don’t know it, that means I’m an Iowan and 100% Norwegian.” Michele is indeed of entirely Norwegian descent.

Michele’s maternal grandfather was Oscar Casper Gunner/Gunder Johnson (the son of Gunder Johnsson/Johnson Tuff and Kari Mikaelsdotter/Michaelson Bjølverud). Oscar was born in Winnebago, Iowa, to Norwegian parents. Michele’s great-grandfather Gunder was the son of John Pedersson Tuff and Barbro Gundersdotter, from Vestre Slidre, Oppland. Kari was the daughter of Mikal Mikalsen Thøring/Bjølverud, from Lesjaverk, Oppland, and of Marit Olsdotter Bjølverud, from Lesja, Oppland.