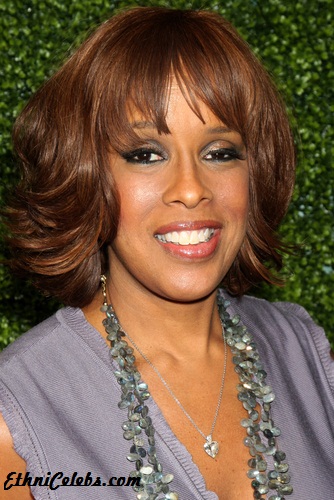 Gayle King is an American television television personality, journalist, and author. She is an editor-at-large for O, The Oprah Magazine. She is a close friend of Oprah Winfrey.

Gayle is the daughter of Peggy and Scott King, who worked for the U.S. government. She was raised partly in Ankara, Turkey. She has two children with her former husband, attorney and assistant attorney general William G. Bumpus.

Standing at 5’10 tall, Gayle has stated that she was made fun of as a child for her height, and that she would prefer to date men at least 6’4 tall.

A DNA test whose results were displayed on the show Finding Your Roots with Henry Louis Gates, Jr. (2021) stated that Gayle’s genetic ancestry is:

Gayle’s maternal grandmother was named Emma Louise Barnes/Brown (the daughter of a man surnamed Copes, and of Ella Barnes). Emma was born in Orangeburg County, South Carolina, to a white father and a black mother. Gayle’s great-grandfather was the son of Robert Elliot Copes and Rose Rowan “Rosa” Ellis.