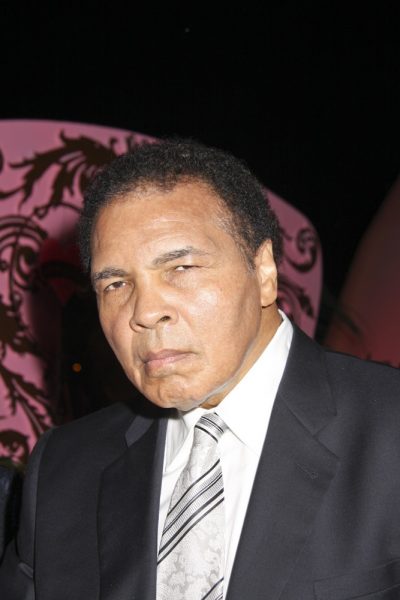 Muhammad Ali was a legendary American professional boxer, activist, and philanthropist. He is considered the greatest heavyweight fighter in the history of the sport. He was nicknamed “The Greatest.”

Muhammad’s maternal great-grandfather, Abe Grady, is often said to have been an Irish emigrant, from County Clare, who moved to Kentucky, but this is evidently incorrect. No Irish-born people named Abe or Abraham Grady appear on any Kentucky censuses. The Abe Grady who was Muhammad’s maternal great-grandfather was almost certainly an African-American man, born in Kentucky.

Muhammad’s paternal grandfather was Herman Heaton Clay (the son of John Henry Clay and Sarah “Sallie” Anne Frye/Fry). Herman was born in Kentucky. Sallie was said to have been born in Madagascar.

Muhamma’s paternal grandmother was Edith Edean Greathouse (the daughter of James Montgomery Greathouse and Betsy Jane Alexander). Edith was born in Kentucky. Betsy was the daughter of Wesley John Alexander and Patsy Fry. Wesley was the son of Archer Alexander (c. 1810, Virginia – December 8, 1880, St. Louis, Missouri), a former slave, who was the model for the slave in the Emancipation Memorial located in Lincoln Park. A biography of Archer, The Story of Archer Alexander: From Slavery to Freedom, March 30, 1863, was written by William Greenleaf Eliot, 1885.

Muhammad’s maternal grandfather was named John Lewis/Louis Grady (the son of Abraham “Abe” Grady, and of a woman surnamed Walker). John was born in Kentucky. Muhammad’s great-grandmother was the daughter of Lewis Walker and Amanda “Mandy” J.