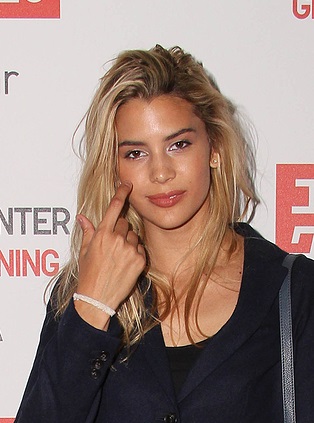 Kenya Kinski-Jones is an American model.

She is the daughter of German actress and model Nastassja Kinski and American music, film, and television producer and instrumentalist Quincy Jones. Among her paternal half-siblings are actresses Kidada Jones and Rashida Jones. Her maternal half-sister is model and actress Sonja Kinski. Her half-aunt is actress Pola Kinski and her half-uncle is actor Nikolai Kinski.

Kenya’s paternal grandfather was Quincy Delight/Delightt Jones (the son of Caesar Jones and Susannah/Susanna Burgess). Kenya’s grandfather Quincy was born in South Carolina, and was a semi-pro baseball player. Caesar and Susannah were both black. Susannah was the daughter of West Burgess and Adele, or of Osborne Burgess and Elizabeth.

Kenya’s paternal grandmother was Sarah Frances Wells (the daughter of Love Adam Wells and Mary Belle Lanier). Sarah was born in Mississippi. Love, who was black, was the son of Nelson Wells and Sarah Campbell. Mary’s father, James Balance Lanier, was white, and had mostly English, as well as Scottish and Welsh, ancestry. Mary’s mother, Cordelia Dickson, was black.

Kenya’s maternal grandmother is Ruth Brigitte Tocki, an actress. Ruth is German (by either birth or citizenship), although Tocki is usually a Polish surname.

Genealogy of Kenya Kinski-Jones (focusing on her father’s side) – https://wc.rootsweb.com