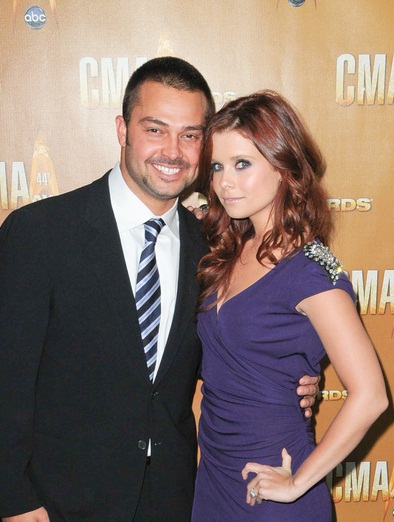 Swisher with wife JoAnna García in 2010, photo by PrPhotos

Nick Swisher is an American professional baseball player. He was an outfielder and first baseman in Major League Baseball (MLB).

He is the son of Lillian and Steve Swisher (Steven Eugene Swisher), a professional baseball player and minor league manager. Nick is married to actress JoAnna García, with whom he has two children. He was partly raised by his paternal grandparents in Parkersburg, West Virginia.

Nick’s paternal grandmother was Betty Lorraine Thompson (the daughter of Okey G. “Offa” Thompson and Augusta/Agusta May Lewis). Betty was born in Parkersburg, West Virginia. Okey was the son of Richard Ellsworth Thompson and Carrie Elsie Lockhart. Augusta was the daughter of Alonzo A. Lewis and Linnie Margaret Montgomery.

Nick’s maternal grandmother was named Jennie Jannello (the daughter of Sam Jannello and Virginia Orlando). Jennie had roots in Sicily.