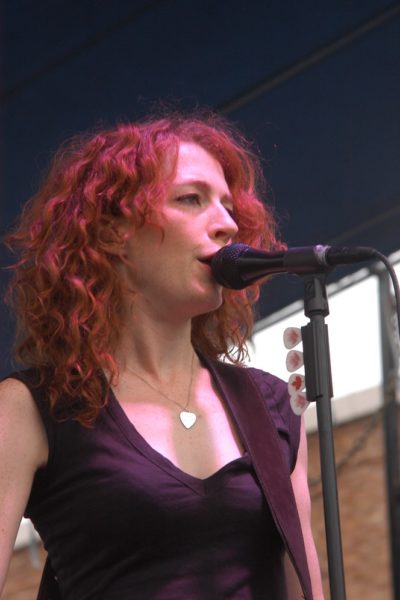 Melissa Auf der Maur is a Canadian musician, singer, songwriter, photographer, and actress. She was the lead vocalist and bassist for indie rock band Tinker, as well as the bassist for American alternative rock bands Hole and The Smashing Pumpkins. Other member of Hole have included Courtney Love. Other members of The Smashing Pumpkins include/have included Billy Corgan, James Iha, and D’Arcy Wretzky.

Her father, Nikolaus/Nick Auf der Maur, was a journalist, politician, and boulevardier, whose own parents were Swiss. Her mother, Linda Gaboriau, who was born in Boston, Massachusetts, U.S., with roots in Canada, is a dramaturg and literary translator. Melissa spent part of her childhood in Morocco, Kenya, and Wales. She is married to independent filmmaker Tony Stone, with whom she has a daughter. Melissa is a dual Canada-U.S. citizen.

Her surname means “on the wall” in German.

Melissa’s maternal grandfather was George David Johnson (the son of Charles Isaac Johnson and Lillian Angeline Burrows). George was born in Boston, Massachusetts. Charles was a Canadian emigrant, from Liverpool, Nova Scotia, and was the son of John Henry Johnson and Lucinda Minard. Lillian was the daughter of Joseph H. Burrows and Florence Angeline Lawton.