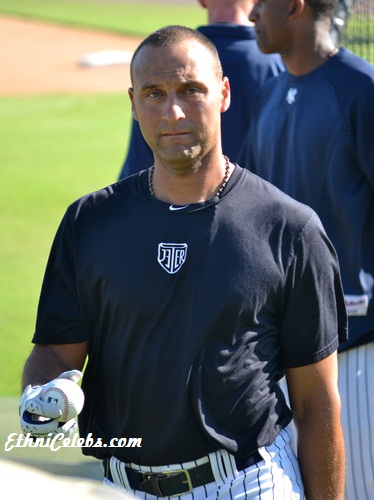 Derek is the son of Dorothy (Connors) and Sanderson Charles Jeter. His father is African-American, and also has some English, and remote Native American, ancestry. Derek’s mother has Irish, and smaller amounts of German and English, ancestry.

Derek is married to model Hannah Jeter (born Hannah Davis), with whom he has three children.

A DNA test whose results were displayed on the show Finding Your Roots with Henry Louis Gates, Jr. (2014) stated that Derek’s genetic ancestry is:

The largest amount, 15%, of Derek’s African DNA is from Nigeria.

Genetically, he was found to have a common ancestor with comedian and actor Jim Gaffigan.

Derek’s paternal grandmother was Lugenia Jeter (the daughter of Bustee Jeter and Minnie Palmore). Lugenia was born in Alabama. Bustee was the son of Green W. Jeter and Jane. Green was a Christian minister. He was the son of a white slave owner, James Williamson Jeter, and of a black slave woman, Charity Jeter.

Genealogy of Derek Jeter (focusing on his father’s side) – https://www.geni.com